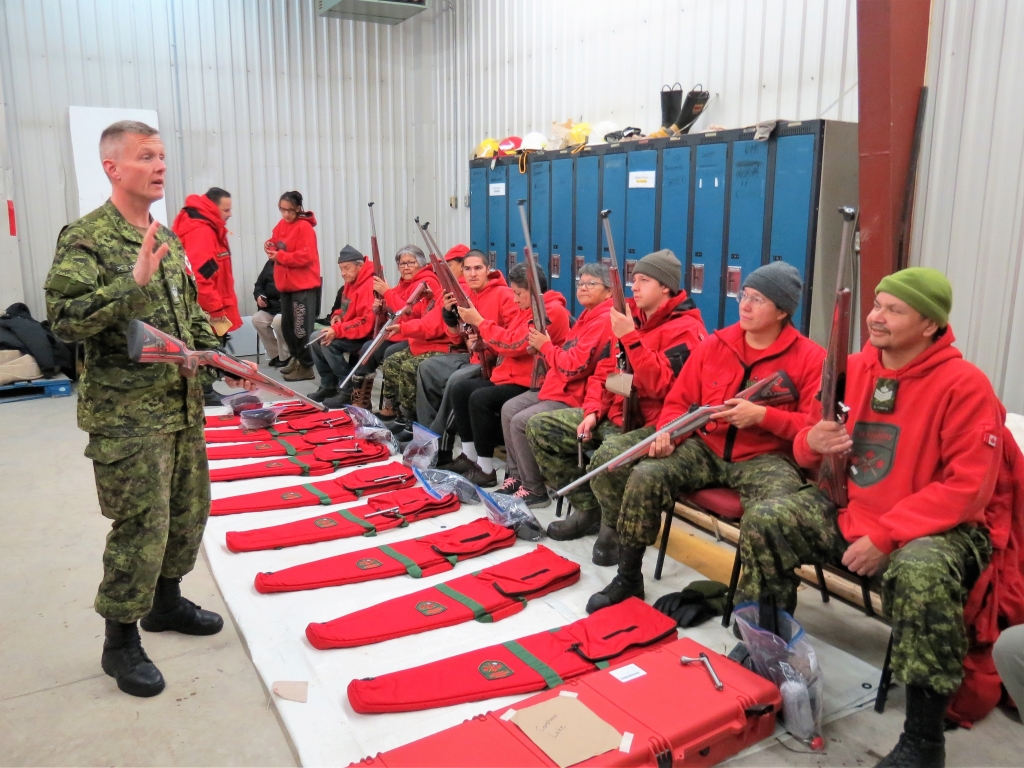 Warrant Officer Chris Thomson, an army instructor, trains Canadian Rangers in Constance Lake in the use of the new Ranger rifle. Submitted photo.

The first of the new Canadian Ranger C-19 rifles have started to be distributed in Northern Ontario.

The first two deliveries were made to Ranger patrols in Constance Lake, near Hearst, and Peawanuck, near the Hudson Bay coast. The C-19 is a specially designed .308 calibre, bolt action rifle, that is replacing the venerable .303 Lee-Enfield Mark 4, which has been in service with the Rangers since 1947.

“We’ve been looking forward to getting the new rifle for a long time,” said Sergeant Neil Neegan in Constance Lake. “We are glad to be getting them.”

The C-19 is designed to meet the specific needs of the Rangers, who are part-time army reservists in the North. It has several specially designed features, such as a bigger bolt handle and trigger guard to allow the Rangers to fire it more easily with gloved hands in cold temperatures. It is shorter, lighter, and more accurate than the Lee-Enfield.

“It’s a beautiful rifle,” said Lieutenant-Colonel Matthew Richardson, commanding officer of the 3rd Canadian Ranger patrol Group, which commands the 570 Rangers in 25 First Nations across the Far North of Ontario. ‘I’ve not heard anyone say a bad word about it. I’m certain the Rangers are going to feel the same way about it.

“They will use it for defensive purposes only, to protect themselves from predators. In the areas where our Rangers work there are dangerous animals, such as black bears, polar bears, wolves, and on occasion they will have to put them down if they can’t scare them off with warning shots.”

The old Lee-Enfields issued to the Ranger patrols in Northern Ontario are being reconditioned by the Canadian Army and given as gifts to selected serving Rangers who meet the requirements of the federal Firearms Act. Sergeant Neegan said he was pleasantly surprised to be given one of them.

“It is a good rifle for hunting moose,” he said. “It has a nice weight and open sights for the hunting I do. I’ve shot a moose with a .303 on patrol for food. I’ve also slept with one next to me when I was scared a bear might come into my tent.

“So I’m happy to get one of the old .303s for myself but the new rifle is going to be great for us as Rangers.”