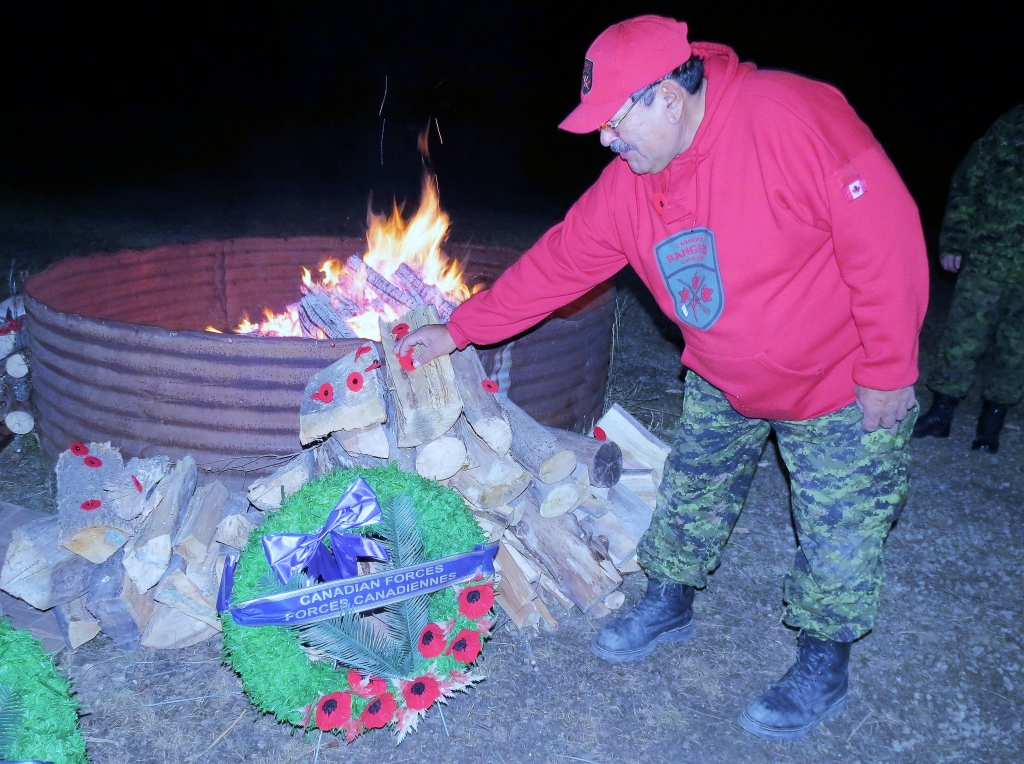 Master Corporal Albert Sutherland of Constance Lake lays his Poppy at the side of the ceremonial fire. Photo by Sergeant Peter Moon, Canadian Rangers

Canadian Rangers on a weeklong military training course took time out of their busy program to hold a sunset ceremony to observe National Aboriginal Veterans Day on November 8.

Rangers held the ceremony from 18 First Nations from across northern Ontario that were training in search and rescue techniques at the 4th Canadian Division Training Centre at Meaford, near Owen Sound.

They gathered with Canadian Armed Forces instructional staff and other military personnel in a large circle around a ceremonial fire, with many of them of the Rangers carrying the flags of their home communities.

The Rangers offered tobacco, said prayers, and laid a commemorative wreath. At the end of the ceremony they placed their red Poppies on logs around the fire.

“It honoured our veterans,” said Master Corporal Albert Sutherland of Constance Lake who laid the wreath on behalf of the Rangers. “I was proud to be part of it and I bet everyone felt the same as me.”

“It was a moving ceremony,” said Lieutenant-Colonel Matthew Richardson, the commanding officer of 3rd Canadian Ranger Patrol Group, which commands the 630 Rangers in 23 First Nations across Northern Ontario. “The Aboriginal contributions to the Canadian Armed Forces have been very significant.”