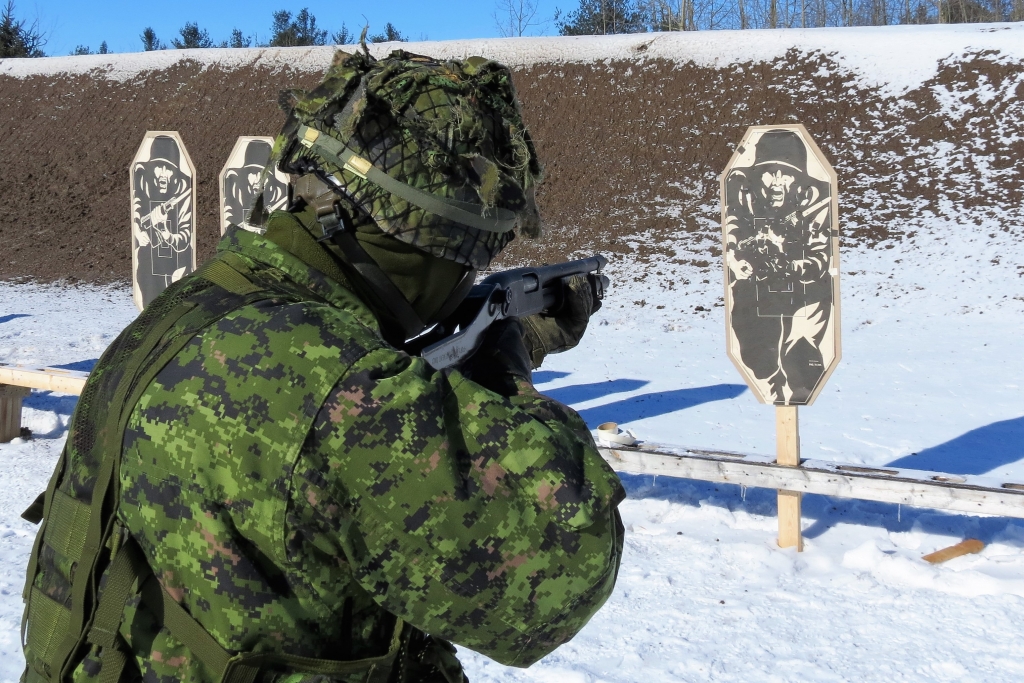 Most members of the Canadian Armed Forces never fire a shotgun as part of their military training or duties. But the instructors of 3rd Canadian Ranger Patrol Group carry them routinely when they travel to the Far North of Ontario to train Canadian Rangers.

“It’s a very effective weapon against black bears and polar bears,” said Captain Caryl Fletcher, the officer commanding the 630 Canadian Rangers in 23 First Nations in Northern Ontario. “They have lots of encounters with bears in camp areas when they are training with the Rangers.”

Warning shots usually send the bears running. But two years ago at Camp Loon, an annual training camp for Junior Canadian Rangers, warning shots failed to deter a persistent black bear which kept coming back to the camp at night.

“It was a big black bear and it came into the camp around 2 o’clock in the morning,” Captain Fletcher said. “Despite warning shots it would not go away and unfortunately the night bear patrol had to take it down. It was shot by a Canadian Ranger using one of our shotguns.”

On another occasion a young black bear kept encroaching on a training camp on a remote island. It was finally driven off unharmed after being hit with some birdshot.

The instructors carry the 870 Remington Police Special, a 12-guage shotgun with a shortened barrel. Its compact size makes it easy to carry in vehicles and on snowmobiles, all-terrain vehicles, and in sleds.

The Rangers in Northern Ontario are almost all Cree, Oji-Cree, or Ojibway and they use shotguns for harvesting geese and other birds, which are a major part of their traditional food supply. They use conventional shotguns with long barrels and they occasionally compete against their instructors in skeet shooting during training. “The competitions are usually won by a Ranger,” Captain Fletcher said. “Some of them are excellent marksmen.”

Warrant Officer Ron Wen is a Ranger instructor who encounters polar bears regularly when he is on the Hudson Bay coast. He has past experience with shotguns. “As a former combat engineer we used shotguns as a breaching tool to open doors,” he said. “It’s also used occasionally as a close quarter weapon in confined spaces.

“I carry a shotgun for protection and to warn the bear. I sleep with a shotgun next to me in case a polar bear pokes its head in my tent in the middle of night. It’s a unique weapon and it can be devastatingly effective.”