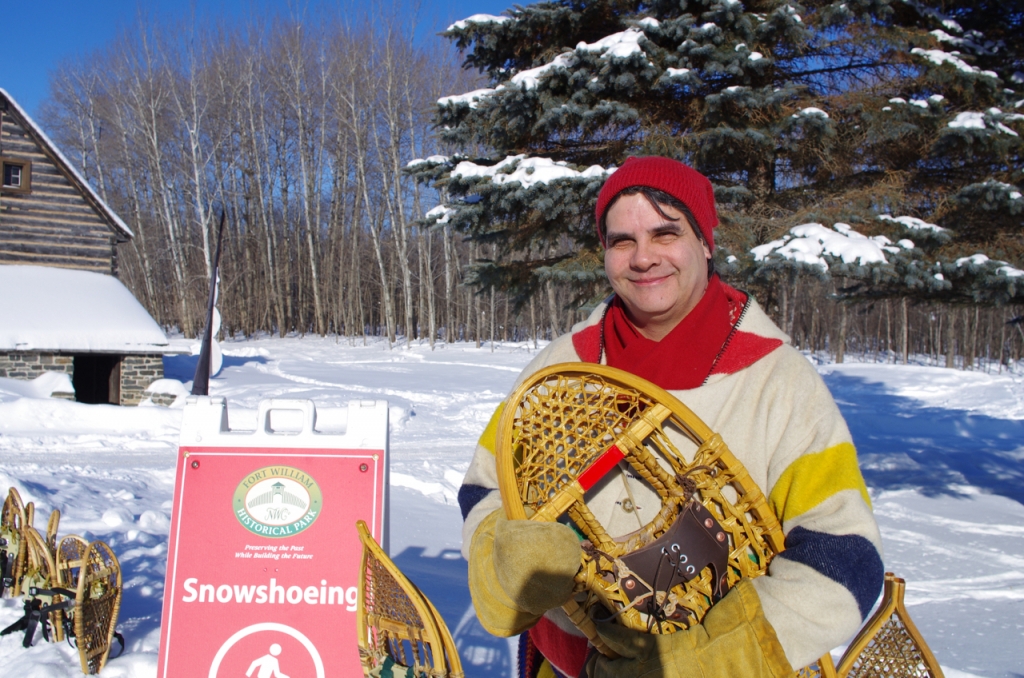 “We had wonderful conversations and we were able to direct them as to where they wanted to go,” says Moore, who recently joined FWHP in the Family Life department. “They said they loved it here. They loved the snow, they loved the maple syrup, and to taste that for the first time. And they enjoyed the adventure of going through the whole farm and being able to see what happened in the 1800s.”

Moore helped out with the giant snow maze during the Voyageur Winter Carnival, which was held from Feb. 13-15 at the Thunder Bay-area tourism facility.

“I love it here at the old fort,” Moore says. “I love the fact that we are back in 1816. We are having just the time of our lives (with) the historical events of that time and era.”

Lac La Croix’s John Walmark shared some of the history of the area with visitors at his snowshoeing station.

“We’re doing a little snowshoeing, we’re learning a little bit about the fur trade and we’re learning a little bit about the relationship between the Anishinabe people and the world around them,” says the Thunder Bay Police constable who volunteers at FWHP. “We’re also teaching (visitors) about the importance of the Anishinabe people in their teachings to the European people and the importance of that to the European survival in 1816.”

Walmark also shared how the Anishinabe learned from everything around them, noting the shape of the snowshoe is based on the snowshoe hare.

“I do education programming here,” Walmark says about his regular volunteer role at FWHP. “I help out with the overnight programming and in the summer I work as a historical interpreter in the fort.”

Walmark encourages other Anishinabe people to get involved at FWHP.

“That is a good way for us to share our culture with the visitors,” Walmark says. “They aren’t just local people; they are from all over the world.”

Walmark says he tries to incorporate teachings and lessons into his presentations at FWHP.

“We had girl yesterday about 10 years old who was interested in asking questions regarding the fur trade, regarding the relationship between the European people and the Anishinabe people in regards to her social studies class,”
Walmart says. “She and her father thought that was quite a good lesson. The way we teach our young is out and about in the wilderness, hands-on rather than sitting in a classroom.”

Walmark says his clan, the bear clan, is responsible for protecting the culture and the people.

“This is a perfect blend of those two callings,” Walmart says. “And beside those roles, we also have a role with educating and ensuring that not only our culture thrives, but the importance of showing how our culture can cooperate and get along with the European culture as well, not just historically but in the present day as well.”