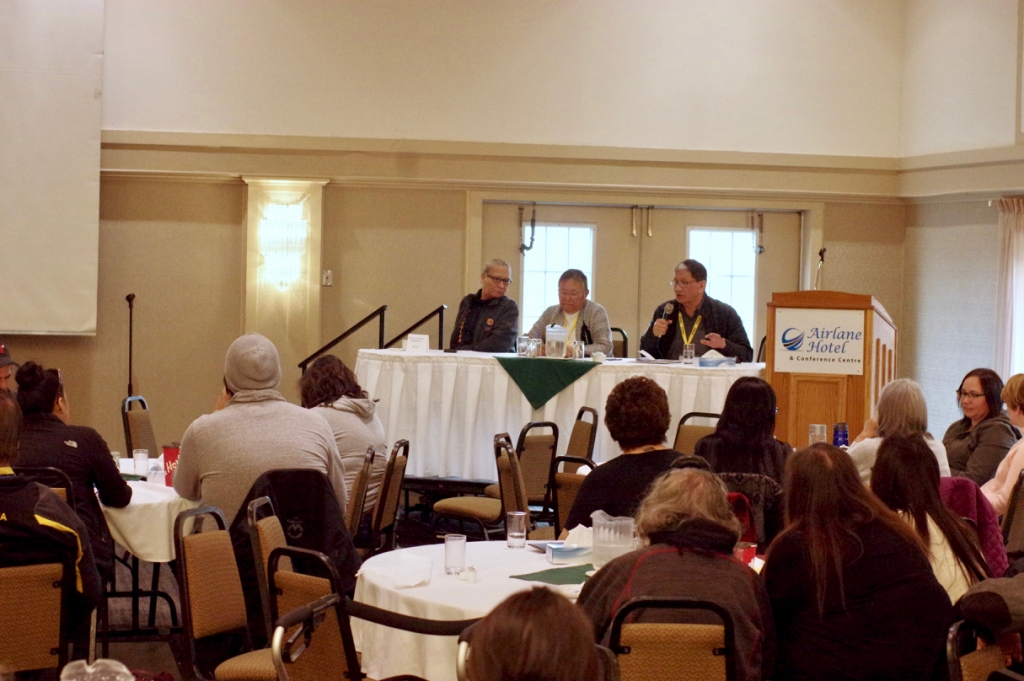 Wawatay Radio Network broadcaster Jerry Sawanas speaks during the Where is language revitalization right now panel discussion on the first day of the Miinookaamin Language Conference 2019, held April 24-25 at the Airlane Hotel and Conference Centre in Thunder Bay.

“Within many of our communities we are at a place where our language is disappearing,” says Anna Betty Achneepineskum, coordinator of Miinookaamin Language Conference 2019, which was held at the Airlane Hotel and Conference Centre. “The younger generation, including my generation, post-residential school, have lost their language so it is important for us as grassroots people to have this conversation. We have a variety of different people here — there are some that are teachers, others are providing student services, others work/write with language services and we have others who are here because they care about preserving and revitalizing the language.”

Kiiwetinoong MPP Sol Mamakwa says it was important that the conference was driven by community people.

“That is really impressive and that is really heartwarming to see because that is where change is going to begin, from the community people,” Mamakwa says. “And that is really critical. From my understanding, different communities are at different stages of how fluent they are. I know there are some strong communities that have the language, whether it is Oji-Cree or Ojibway and Cree.”

Mamakwa says the communities need to start retaining the knowledge of their Elders.

“I think it is upon us as individuals to start speaking the language at home, and that is very critical,” Mamakwa says. “Every family should start speaking their language — that is the most effective way right now to bring back the languages. So when our grandchildren grow up they can start engaging with our Elders that do not speak English.”

John Gagnon, CEO/publisher of Wawatay Communications Society, delivered a presentation on Blending Tradition with Technology 2.0 during the conference.

“This September 2019 Wawatay Radio is going to be 35 years old,” Gagnon says. “And we still have four of the main broadcasters — Kenina Kakekayash, Bill Morris, Jerry Sawanas and Jules Spence — who have been with Wawatay since its inception. So I would like to start off by giving them thanks for their years of dedication to Wawatay and preserving the language.”

Gagnon also raised the idea of applying for funding for paid broadcasters in First Nation communities across the north, which would assist with Wawatay’s programming, help with language retention in the communities and make possible the moving of community radio stations into high schools to encourage students to use their language on air.

“If we are looking to preserve and enhance language with the youth, then for me it only stands to reason that we would put our radio stations in the high schools so students could learn how to use them,” Gagnon says.
Sawanas participated in a panel discussion on Where is language revitalization right now at the beginning of the conference.

“Our language was taken away from us and it happened in residential school,” Sawanas says. “I gave an example of my friend — it took him 30 years to tell me, and that’s how deep his assaults were, to take his language away. What he said to me was they made us hate our language.”

Sawanas says it was important to hold the conference because the people of Nishnawbe Aski Nation need to know where their language comes from.

“It comes from the Creator and then somebody tried to take it away,” Sawanas says. “Somebody tried to beat it out of us. And it’s still here today. It’s like a bank card — if you lose your language, you just have to activate it again.”
Webequie and Wawatay were the sponsors of the conference.