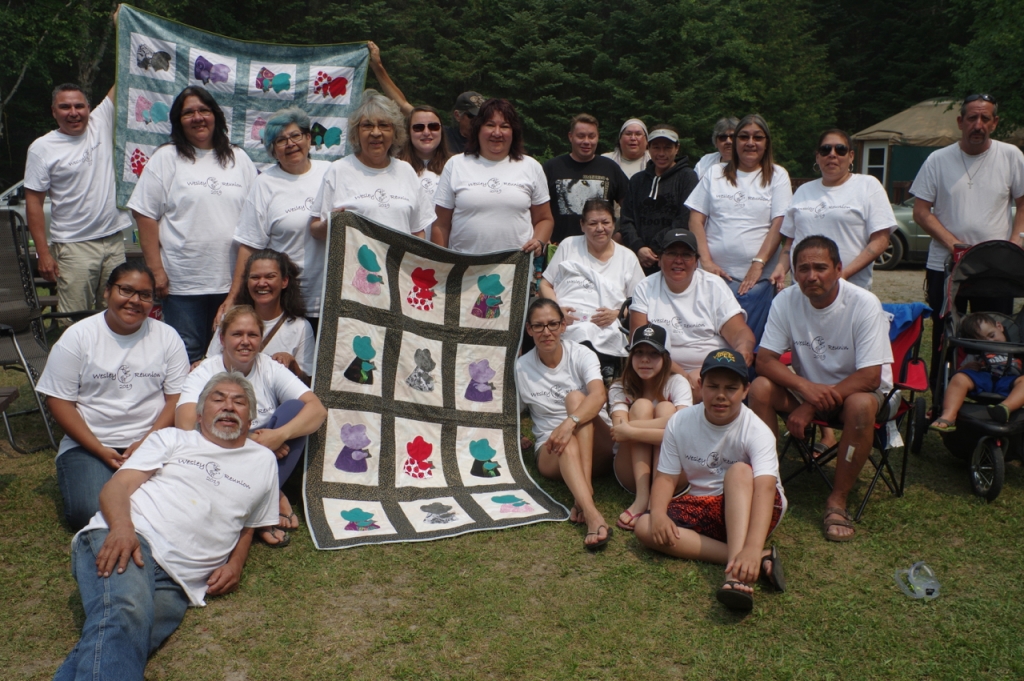 The children and grandchildren of Lac Seul’s Ed and Sarah Wesley hold up the blankets that daughter Winnifred Wilcox is making for each of her siblings during the Wesley Reunion at Ojibway Provincial Park in early July. Photo by Rick Garrick.

The Wesley Reunion of the children and grandchildren of Lac Seul’s Ed and Sarah Wesley featured a set of blankets made for each of their nine children.

“My mom passed away two years ago and my youngest sister Fran asked me to make a blanket for all the (eight) sisters and our brother Homer,” says Winnifred Wilcox, one of the nine siblings who now lives in Kenora. “So I took my mom’s clothes and I made the dresses and this is what I came up with. It took me about 10 months. At first I didn’t think I was going to do it but as the reunion got closer, I felt obligated that I had to do something.”
Wilcox says all of the blankets will have the same design.

“My mom used to collect ladybugs, so I put in a little ladybug,” Wilcox says. “And this ladybug is holding a bible because my mom always used to read bibles.”

Wilcox says reunion with all of her siblings was “very touching.”

“There’s a lot of memories,” Wilcox says. “We took a trip up to Lac Seul. My nephew Danny took some people, his uncle (Homer Wesley), and they did a little bit of fishing and they visited his old stomping grounds and took a lot of pictures. There was a lot of memories and a few tears shed but it was very worthwhile.”

Homer, one of the nine siblings who now lives in Winnipeg, says the trip to Lac Seul included a visit to where his grandfather used to live.

Ed used to work at the Hudson’s Bay Post. Homer says the reunion was “very touching.”

“Everybody is reminiscing about the good old days,” Homer says. “Everybody remembers when they were in their childhood, playing on the sandbanks. It looked like we were halfway out the lake when we were on the sandbank.”

The reunion was held at Ojibway Provincial Park about 25 kilometres south of Sioux Lookout.

“I looked after my mother for five years before she passed, and to have this is awesome,” says Fran Machimity, the youngest of the nine siblings who now lives in Thunder Bay. “I love the blankets. She just showed me today and I was overwhelmed with it.”

Machimity says the siblings made a quilt for their mother when she first became ill.

Machimity says she is overwhelmed and happy to see all of her siblings and their children at the reunion.

“Everybody is doing their own thing, but still it’s a family gathering,” Machimity says. “It’s just refreshing old memories — at night we talk about remember the old days, remember we did this, remember how mom and dad did this. It’s awesome.”

Shirley Anderson, one of the nine siblings who now lives in Sioux Lookout, says her mother always used to make a feast for the family on random occasions when she lived in Hudson.

“That is one of the memories we are sharing here,” Anderson says. “We’re cooking all the foods she liked and what she used to cook.”

Anderson says the reunion was about remembering all of the fun times they had when they were young.