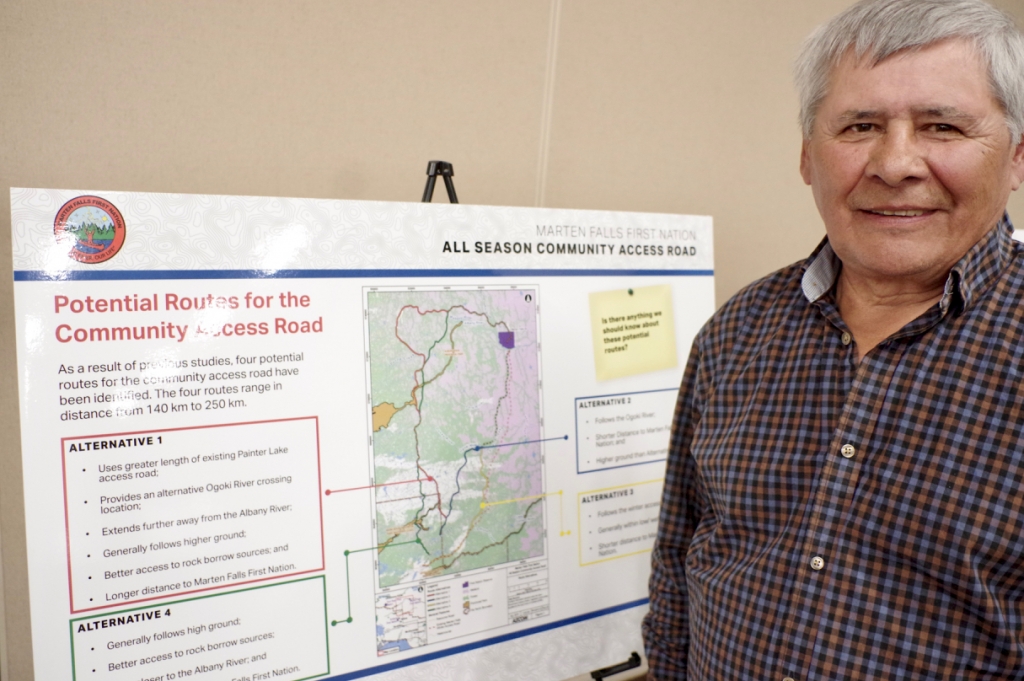 Marten Falls shared its plans to build an all-season community access road to the provincial highway network during public information sessions on April 30 and May 1.

“Right now we have identified four options — we haven’t selected anything yet where the road is going to go,” says Lawrence Baxter, senior community advisor with Marten Falls, during the April 30 session at the Victoria Inn in Thunder Bay. “We’ve hired AECOM to take a look at a pre-engineering design study and they will determine what is the best route. We’ll be using a lot of their information to support the EA (Environmental Assessment) process.”

Baxter says Marten Falls is currently working on developing a Terms of Reference, which provides a framework for planning and decision-making during the next phase of the EA.

“During that Terms of Reference, we are going to be doing a lot of community consultation,” Baxter says, noting they have already talked with Aroland about the all-season road as it will go through their territory. “Once we get that
Terms of Reference done, it will go the the Ministry of Environment for their assessment and review. We also might have to do a federal EA process.”

Baxter says the all-season road would bring down the cost of fuel and other supplies for the band and citizens.

“People will be free to come and go whenever they want,” Baxter says. “So I think this is very positive for the community — they’ll have access to good healthcare.”

Baxter says some concerns have been expressed about the all-season road, such as social issues.

“We are going to control access,” Baxter says. “That is something the community members are worried about, having an influx of people come in. So we will be dealing with how do we control that.”

Marten Falls Councillor Bob Baxter says most of the people the band has talked with are interested in the road in order to cut down on the cost of living and to have access to the south.

“A lot of them really enjoy the winter road,” Bob says. “The time frame they have is six weeks, tops, and they really enjoy coming out and getting their groceries and whatever it is that they have to get. This all-season road that we are planning will really be a great benefit for the community for sure.”

Qasim Saddique, project director with Marten Falls, says all four of the possible routes have advantages and disadvantages.

“The (proposed) roads on the eastern side are somewhat following the winter road, not completely but they sort of try to use the winter road to a certain extent,” Saddique says. “The benefit of that is it utilizes a portion of the old winter road. The downside of the road is it goes through a low-lying muskeg area which will potentially be very difficult from a construction and engineering perspective. It is probably more prone to flooding and it is right next to a river, and as Canada is going through significant flooding right now you can imagine putting a road right next to a river poses challenges.”

Saddique says the western corridor is a longer route to the community.

“So that is the downside of that corridor,” Saddique says. “The strength of that corridor is it uses an esker, a high ground, which takes away the construction challenges that the eastern road has. And it is also less prone to issues like flooding in the future.”