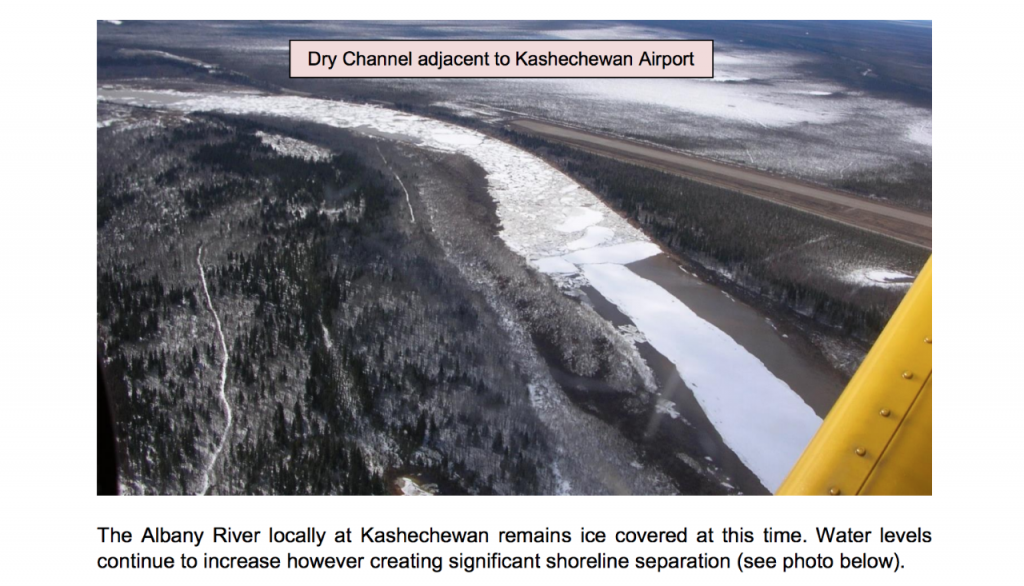 A Flood Watch was issued for the Albany River on May 2 with Kashechewan and Fort Albany residents warned to keep a close watch on river conditions as ice break up may be occurring upriver. The Ministry of Natural Resources and Forestry – Cochrane District and the Mushkegowuk Council Emergency Management Services advised area residents in a May 7 update that the Flood Watch remains in effect until May 14. The update indicated that the level of flood risk remained at moderate to high for the two James Bay communities.

“The water is rising and it looks like it is going to move soon but I don’t know when,” says Kashechewan Chief Leo Friday during a May 7 phone interview. “Our Elder’s marker is on level now that our ice is ready to move.”
Friday says about 900 Kashechewan citizens were expected to travel to their camps out on the land by May 9 to avoid possible flooding on the Albany. The community, which is located on low ground on the north shore of the Albany, has previously been evacuated due to flooding about 17 times over the past three decades.

“We were trying to get them out from the community for the flood season and we were trying to have them stay there during the breakup,” Friday says during an April 28 phone interview, noting that the land is high and dry further up the Albany. “We were aiming for 1,000 people (to) go out at the beginning but the supplies didn’t come in early enough.”

Friday says the remaining 900 citizens will likely be evacuated to nearby communities along the coast if the Albany does flood this year.

“We didn’t want to take anyone out into the city or towns because of this (COVID-19) crisis that is happening,” Friday says. “So we requested to take our people if something happens maybe to Peawanuck, Attawapiskat or Moosonee.”

“We asked the government to prepare a tent emergency centre back on March 13, and (they) didn’t respond to us,” Friday says, noting that the federal government finally responded, after he sent an e-mail about a week later, about holding a conference call a week further on. “Which is very late in the season.”

An Indigenous Services Canada (ISC) spokesperson says ISC is working in close coordination with community leadership, the province, Mushkegowuk Council and other federal departments and is supporting efforts led by the community to reduce the risks presented by COVID-19 in their community, including safe isolation and spending time on the land to engage in traditional activities, such as the spring goose hunt.

“To that effect, ISC has provided $2.1 million in funding to Kashechewan First Nation for their self-isolation from COVID-19 at traditional hunting camps,” says Rola Tfaili, a spokesperson for ISC. “These funding efforts are aligned with broader public health recommendations for increased physical distancing during the pandemic. When equipped with the proper supplies and equipment, going on the land in small groups is a positive and healthy form of physical distancing – an important measure in preventing and reducing the spread of the virus.”

Tfaili says ISC is in regular contact with Kashechewan and other partners to discuss and prepare contingency plans for any evacuation of remaining community citizens in the event of flooding.

“During this challenging time, ISC will continue to provide the necessary support to Kashechewan First Nation,” Tfaili says.

Friday says the community is hoping for a “good breakup” this year as it has been a cold and long spring.

“We’re looking forward to seeing a smooth breakup and no flood,” Friday says. “In the fall when (the Albany) was freezing up, it froze up really low. The water was really low when it froze up, not like some other times when the water climbs up to the point where there is a lot of water in the dry area.”

MP Hajdu visits Neskantaga, Yukon
You Are What You Eat