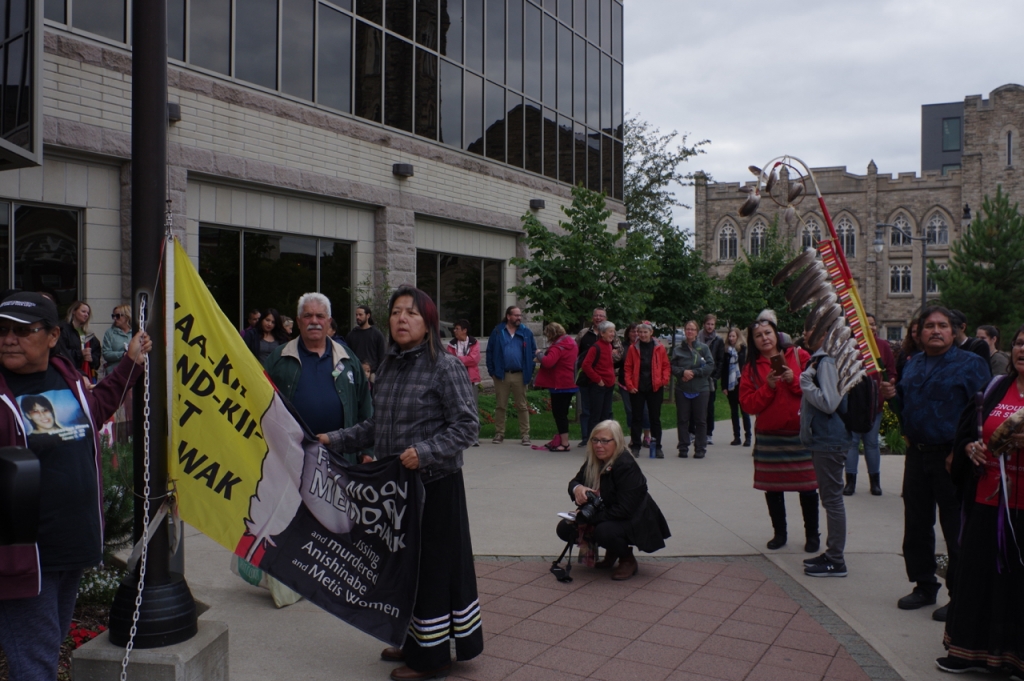 The 13th Annual Full Moon Memory Walk was kicked off with a screening of the Go Home, Baby Girl documentary film and comments by Ceejai Julian at Lakehead University on Sept. 5.

“Ceejai shared her story after the documentary and there was questions and comments,” says Sharon Johnson, organizer of the Full Moon Memory Walk, which was held on Sept. 6 from Thunder Bay City Hall to the Neebing-McIntyre Floodway where Johnson’s sister Sandra was found murdered in 1992. “Everybody was just impressed with her strength to keep on going after all she went through.”

The documentary film, by Audrey Huntley, focuses on the story of Julian’s family as they struggled for justice over the 1992 murder of Julian’s sister Norma George in Vancouver’s Downtown Eastside.

“I came here to show honour and respect for Sharon Johnson and her family and try to have a voice for the Missing and Murdered Indigenous Women and Girls (MMIWG), including my sister as well as survivors, and to share how important it is for us to have our lives honoured and respected as women, because we are strong, beautiful women and life givers,” Julian says. “I just want to thank the Anishinabe people for allowing me to be here and have a voice.”

A group of First Nation walkers from Norway House in northern Manitoba also joined the Full Moon Memory Walk after completing their walk from Winnipeg on Sept. 6.

“(We’re) remembering the lady (Barbara Kentner) who died from an injury with the trailer hitch and remembering the daughter that was left behind and also those teenagers that (died) in the river here,” says Brenda Osbourne, one of the Manitoba walkers. “I’m hoping that people will continue to have these awareness (walks) across the country.”

Osbourne says her group of walkers are considering a walk to B.C. next year.

“Your feet get sore, but we keep going, we don’t stop,” Osbourne says. “We walk and pray, putting tobacco down.”

“It seems to be that there is more again here this year, which is encouraging,” Fiddler says. “And to see the support from the City (of Thunder Bay) is something that we need to acknowledge. And for the family that organizes this event, the Johnson family, it is important to acknowledge them for doing this and creating that awareness. It is a very important issue.”

Fiddler says his family has supported the Full Moon Memory Walk for many years.

“It’s really good for everyone to be out here,” Fiddler says. “To see so many young people too is very heartwarming.”

Brian Eyolfson, a commissioner with the National Inquiry into Missing and Murdered Indigenous Women and Girls, appreciated the “great turnout” for the Full Moon Memory Walk.

“There were some very inspiring speakers and some moving moments,” Eyolfson says. “It was a really great turnout and I was really honoured to be a part of it. It is really important to participate and show support for families who have lost loved ones, for survivors of violence and to participate in remembering the lost loved ones and also drawing attention to this very tragic issue that urgently needs to be addressed.”

The Full Moon Memory Walk began with an opening prayer and smudge, a hand drum song for the MMIWG, greetings from dignitaries and MMIWG family members, the flag raising of the Full Moon Memory Walk flag and a song by women hand drummers at City Hall. A ceremony was held with honour and healing songs on the Ko-Ko-Miss-Inaan traditional drum from Mitaanjigaming First Nation after the walkers reached the location on the Neebing-McIntyre Floodway where Sandra Johnson’s body was found. A potluck feast was held after the ceremony and the walkers were transported back to City Hall on a bus after the feast.