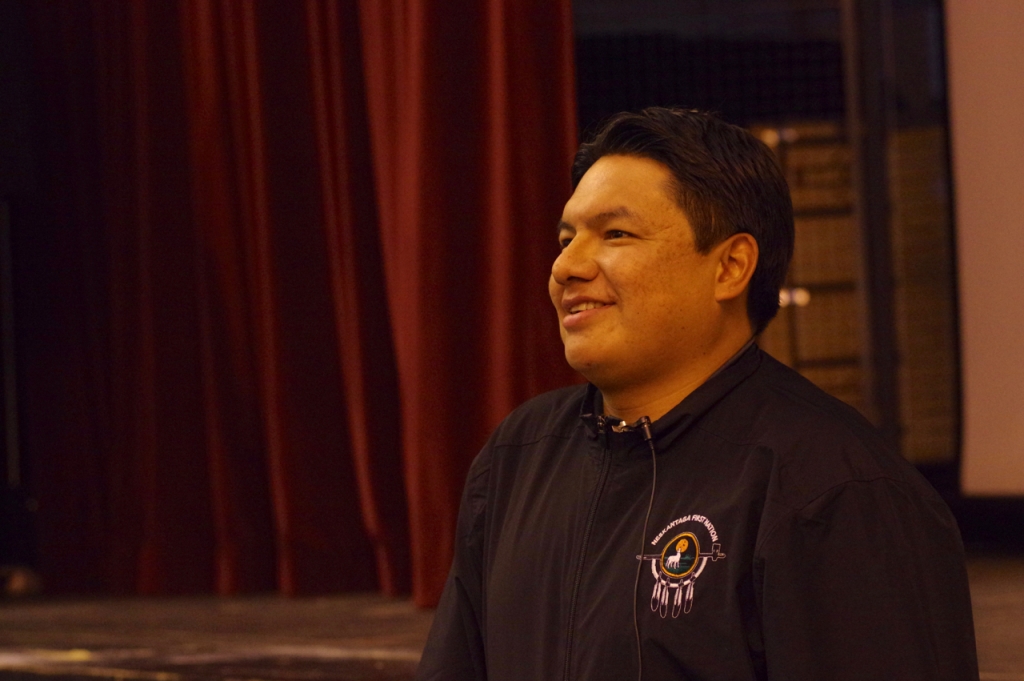 “I grew up in Thunder Bay — we moved here when I was five,” Fox says on Oct. 20 at the University Lecture Theatre. “I went to school every single day. I didn’t miss class. I don’t know how, but at that young age I knew that education was going to get me somewhere.”

Fox says hockey was his passion, noting his dream was to play in the NHL.

“I was on the outdoor rinks every single night right until 10 o’clock,” Fox says. “I just loved hockey. As I got older, hockey and school was my thing.”

Fox played AAA hockey in Thunder Bay and was drafted sixth overall in the Ontario Hockey League by the Sault Greyhounds when he was 16.

“That was a huge accomplishment for me, playing with these high-level hockey players, being treated kind of like a rock star in the Sault,” Fox says. “And at that time everything started to catch up with me. Like any kid at that age, you start partying, you go to bars. I realized that I carried all that (residential school) intergenerational effects. It took me a long time to understand what was happening, which is why I stopped drinking and focused on my school.”

“You see the social issues with our people, you see them on the streets,” Fox says. “So I never try to judge them. I try to understand where they are coming from.”

“I did civil litigation and small claims,” Fox says. “I enjoyed going to court. I kind of enjoyed suing people.”

Fox was elected as deputy grand chief in 2015. His portfolios include education, economic development, energy, climate change and sports and recreation.

The Speaker Series is designed to raise the awareness of the history and culture of Indigenous people. It will be held once a month and is open to the general public.

“The premise of the Speaker Series is for a local Indigenous leader or a local Indigenous academic to come and talk about a particular topic,” says Clyde Brandon Moonias, coordinator of the Aboriginal Awareness Centre. “With today’s event, I felt like a lot of people who may have lacked knowledge of First Nations law and governance really got to learn from our current speaker here today.”