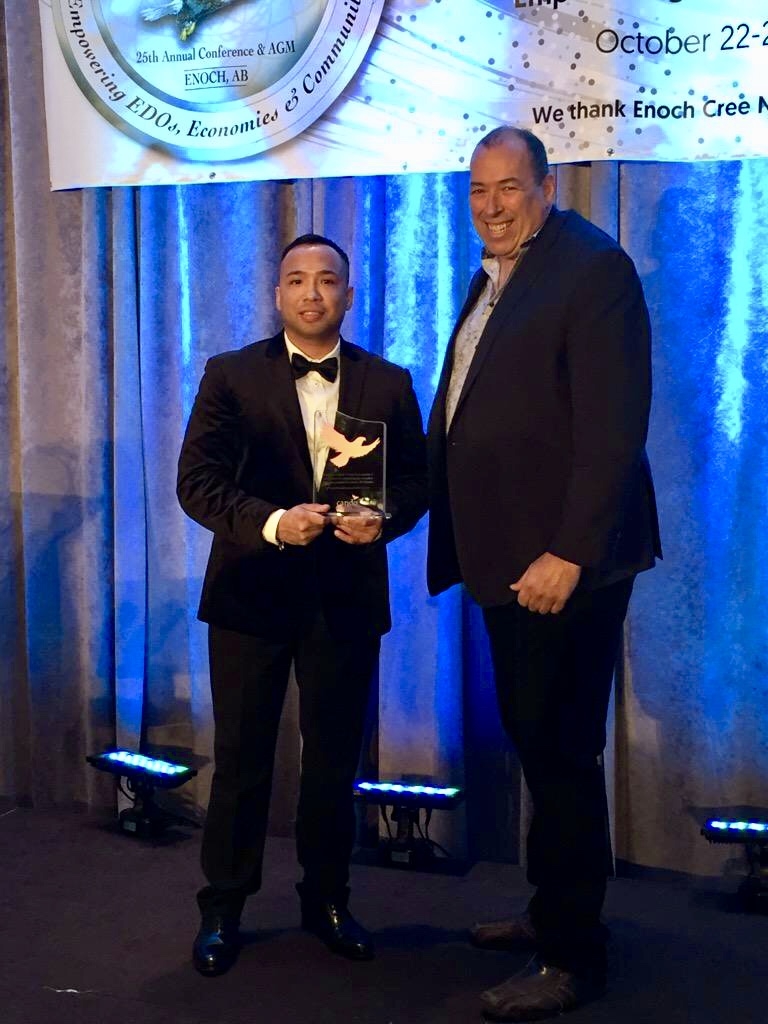 Jason Rasevych, a citizen of Ginoogaming First Nation earned praise after being recognized as a top economic developer of the year by Cando (Council for the Advancement of Native Development Officers), and becoming the finalist at the Cando 25th Anniversary Conference and AGM held on October 25 in Enoch, Alberta.

Ginoogaming First Nation Chief Celia Echum spoke of Rasevych of when he was younger in the community.

“I’ve known Jason for decades, since he was a youth in our community. He’s always had a relentless spirit as a go-getter to do what it takes to makes thing happen for our peoples.”

Chief Echum also added she was proud of Kasevych for being recognized and awarded and added that youth should have a platform.

“I am very proud that he was recognized, I believe we need to do more to acknowledge our front-line staff and bring our youth up by giving them a platform to showcase their talents and succeed.”
Rasevych says what it was like to be on the stage during the conference.

“I was humbled to be on a national stage to talk about my journey. It was an honour to present in the Enoch Cree area, Treaty 6, my speech was a true reflection and a magical moment.”
Rasevych praises Cando for recognizing economic development professionals.

“I don’t think EDOs in Ontario and across Canada get the recognition they deserve like they do from Cando.”

Council for the Advancement of Native Development Officers is a non-profit society that is Aboriginal controlled, and community based which promotes Indigenous economic development.

Rasevych played an instrumental role in a $69 million project announced this past October, which will bring internet access to five remote First Nation communities in Northern Ontario.

“It’s going to be life transformational,” Rasevych said. “It will help them stay at home and save costs instead of having them fly out to urban communities.”

Rasevych fronted another project that is the historic agreement reached earlier this year between three First Nations of Aroland, Eabametoong and Marten Falls and the Ontario Ministry of Natural Resources and Forestry. The deal gives the First Nations forest management and harvesting rights to the Ogoki Forest. Rasevych led the First Nations owned forestry corporation to the NADF Business Award for Partnership of the Year in Timmins this year.

Rasevych also stated what needs to change and hinted at the future.

“The playing fields needs to be leveled, there needs to be more support, we need to stop lateral violence, we need to lobby the economic buyers. We have big plans for 2019 and beyond, this is the beginning of a new chapter,” Rasevych said.