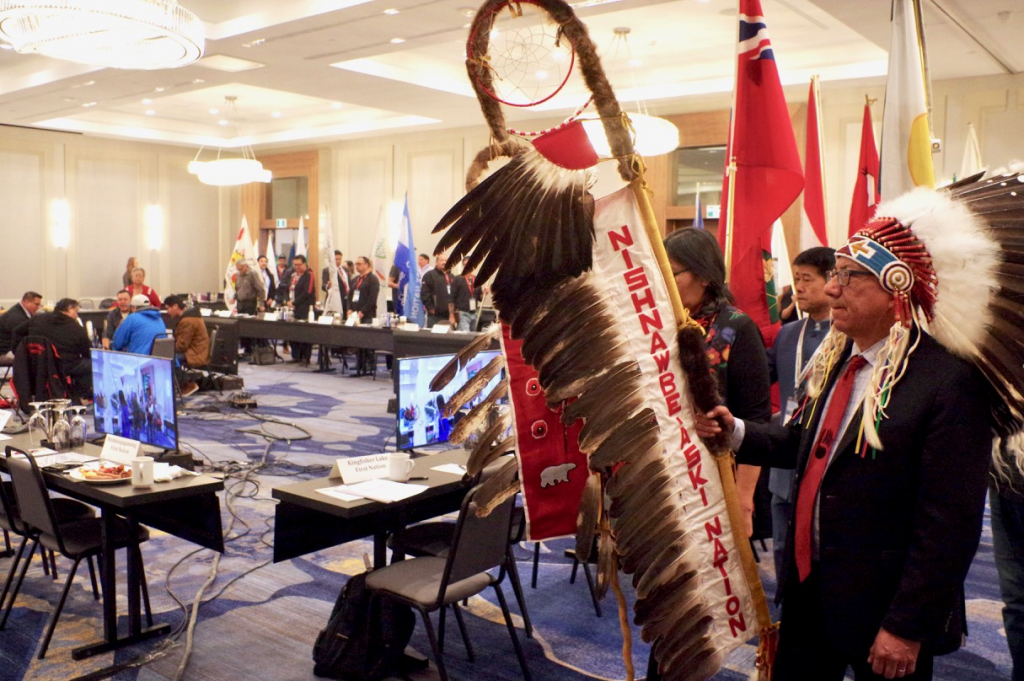 Grand Chief Alvin Fiddler wrote a letter to the CEO of the Sioux Lookout Meno Ya Win Health Centre to express his concerns about the communications process with First Nation communities at Meno Ya Win after six staff tested positive for COVID-19 as of June 22. Photo by Rick Garrick.

Grand Chief Alvin Fiddler is calling for more communications with First Nation communities after six staff at the Sioux Lookout Meno Ya Win Health Centre (SLMHC) tested positive for COVID-19 as of June 22.

Fiddler says he is currently writing a letter to Heather Lee, president and CEO at SLMHC, to express concerns about the communications issue and to remind her of the negotiations with First Nation leaders in the 1990s that led to the Sioux Lookout Four Party Hospital Services Agreement signed by Canada, Ontario, Town of Sioux Lookout and Nishnawbe Aski Nation on behalf of the Sioux Lookout Zone First Nations that officially implemented the amalgamation of the General Hospital and Zone Hospital in Sioux Lookout.

“That is why I wrote that letter today to remind her of that agreement and that anything that may impact the wellbeing and the health of our communities, those need to be communicated to our leadership right away,” Fiddler says during a June 24 phone interview.

“We still have (citizens) who are travelling from our communities to Meno Ya Win or through Meno Ya Win for various appointments or for treatments. So that is a huge concern for our leadership, the risk of catching this virus while travelling through Sioux Lookout whether it’s at the hospital or the hostel.”

Lee says SLMHC’s priority as a hospital is, and always will be, patient and client care.

“We have received the Grand Chief’s concerns and his letter,” Lee says in a June 25 e-mail reply. “We acknowledge that communication is important, especially in times when we are all very concerned with the threat of this pandemic to the people we serve. As such, SLMHC has provided timely and accurate information under the rapidly changing environment that COVID-19 has created.”

Lee says SLMHC has participated in conference calls with its partners in health, as well as community leadership across its entire catchment area, in addition to addressing a specific update on positive cases in the form of a letter to Chief and Council of each community.

“We also work closely with the public health teams at both the Sioux Lookout First Nations Health Authority and the Northwestern Health Unit,” Lee says. “As we’ve communicated with leadership, test results are updated often as surveillance is ongoing and lab results are continuously being reported to public health units in our region. We will continue to update the residents and leadership of the communities we serve, working closely with Sioux Lookout First Nations Health Authority and Northwestern Health Unit.”

Lee says every aspect of how SLMHC used to operate has changed due to the COVID-19 pandemic.

“It must be noted that SLMHC has always operated under the guiding principle of the Four Party Agreement,” Lee says. “However currently, our main focus is keeping our patients, our staff, our physicians and all of the communities we serve safe from the COVID-19 virus. This has been a very difficult process globally for every hospital. We are learning as we go and we ask for your patience as we continue to provide the best services we can under such trying times.”

The SLMHC began surveillance testing for 241 staff and physicians on June 18 after a recent cluster of positive COVID-19 test results, including three patients who tested positive after being admitted to SLMHC for other reasons during the week of June 15-19 and a positive test result among staff that SLMHC became aware of during that same week. The staff testing has since resulted in 149 negative results and 86 pending results as of June 22.

“We recognize that these new cases of COVID-19 create concern among the residents of the communities we serve, and we wish to remind everyone that SLMHC has been prepared for COVID-19 since March and we have a pandemic plan in place which has been guiding us for several months,” Lee says in a June 23 SLMHC online update. “Since implementing the pandemic plan, all staff and physicians are mandated to wear face masks throughout their shift, all non-essential travel outside of northwestern Ontario was restricted, visitor/escort restrictions continue to be in place and screening for all staff and anyone entering the facility is being completed at the entrance.”

“And the First Nations Inuit Health Branch is continuing to support in terms of doing any contact tracing, et cetera,” Hajdu says. “That is being led by Meno Ya Win and the local health authority, so I think the key point is that everybody is working together here to try and make sure the outbreak is contained. It is a very concerning area and this is what we’ve always said about COVID-19, what we’re trying to do is keep it out of the north, keep it out of especially vulnerable populations because we know it can be very easily spread and it can be very devastating for communities that don’t have access to health care or have underlying health conditions.”

Hajdu, Thunder Bay-Superior North MP, says any person who is feeling ill should identify themselves to the local health authority or nursing station.

“Ontario has a very liberal testing policy so if you feel at all unusual, if you have a headache, if you have diarrhea, if you have a cough, if you have a fever, any of these things it is really important to step forward and ask to be tested and also to isolate,” Hajdu says. “When I say isolate, I think what people don’t realize is sometimes they think isolate in the home with your family. It is really important that you have as little contact as possible with the other members of the family, so if there is a separate bedroom to use that as a place you can go where there is less people.”

The SLMHC states that it has been testing all inpatients for COVID-19 at the hospital site and surveilling residents and staff at the William A. George Extended Care Facility, which has not had any positives cases.

The SLMHC online update adds that the NWHU has been conducting external contact tracing and case management with the confirmed positive cases and SLMHC’s Infection Control department has been handling internal contact tracing. People who have been in contact with the six staff who tested positive with asymptomatic conditions are being notified and SLMHC has been working with the SLFNHA to keep the leadership and residents of First Nation communities in the area informed.

“Despite the risk of transmission from asymptomatic positives being low compared to those with symptoms, contact tracing has been promptly initiated to determine if the virus has spread further,” says Dr. John Guilfoyle, public health physician at SLFNHA, in the June 23 SLMHC online update.

The SLMHC states that it has also been working with the NWHU and SLFNHA’s Preventing Infectious Disease program to update the public and ensure public safety as further results come in.

“We are very grateful to our partners at the NWHU and SLFNHA who are working hand-in-hand with us to navigate this situation and as we work to complete our individual mandates,” Lee says. “We want to reassure the public and our communities, both locally and in the north, that our highest priority is the safety of all patients, staff and physicians.”

SLMHC states that staff and physicians who have symptoms are required to follow an immediate in-hospital protocol, which includes isolating at home, contacting the staff health nurse and making arrangements to be tested.

The Sioux Lookout Assessment Centre has also been offering testing for anyone who is concerned about possibly having COVID-19, with appointments available by calling 737-5880 from 8 a.m.-4 p.m. Monday to Friday. Further information is available online at: www.slmhc.on.ca/covid19, www.nwhu.on.ca or www.slfnha.com.