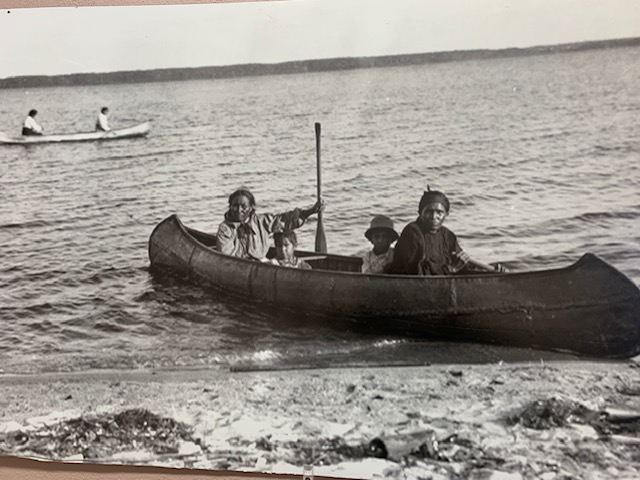 A group of Lac Seul citizens canoe on Lac Seul prior to the 1929 flooding of Lac Seul for the Ear Falls hydro dam. (Submitted photo)

Lac Seul had the appeal of its claim against the Government of Canada for the illegal flooding of more than 11,000 acres of reserve land heard by the Supreme Court of Canada.

“We’re hopeful that closure will finally come to our community as a result of this appeal and we’re granted a new trial or a negotiation table,” says Lac Seul Chief Clifford Bull. “We were encouraged by the proceedings — this is a case that is extremely important to Lac Seul. We feel our trial lawyers did very well in presenting our points of view and we are hopeful that in six-to-seven months when the justices come back we’ll get a favourable response from them.”

Lac Seul’s land was flooded after the federal government approved construction of the Ear Falls Dam in 1928 at the outlet of Lac Seul. The dam raised water levels on Lac Seul by 10 feet and flooded the Treaty #3 community’s homes, crops and manomin (wild rice) as well as nearly eradicating fur-bearing animals on the shores of the reserve.

“There was a lot of damage,” Bull says. “We lost pretty much everything, 80 homes went under, sacred grounds, rice fields were gone. It was complete devastation and damage to the First Nation.”

Bull says he has seen the remains of graves that have been washed onto the shoreline due to ongoing erosion from the Lac Seul Reservoir.

“I’ve seen skulls, I’ve seen bones on the shore,” Bull says. “So that is still ongoing, the erosion.”

The flooding also divided the communities of Kejick Bay and Whitefish Bay by separating them with water. Although the community’s lands were used to generate power, they did not receive electricity on the reserve until 1982, about 50 years after construction of the dam.

“Our First Nation has suffered from this illegal flooding for almost 100 years,” Bull says. “We hope that the Supreme Court’s decision will bring our lengthy pursuit of justice and reconciliation to its final chapter. Our people need closure and to continue building for our future.”

“We went through the specific claim process for I believe 13 years, around 1995 to 2007,” Bull says. “And then a new (federal) government was elected and they arbitrarily came to the community and said we are going to give you an offer of $7 million. That was rejected by the (community) and we went to court and we managed to win our court case. We call it a partial victory because were able to get $30 million, but we felt that the first trial judge got it wrong and we needed to revisit the way the compensation of loss of use, of loss of land was arrived at.”

Bull says there were 19 interveners that participated in the Supreme Court hearing.

“There are a lot of flooding issues right across Canada that have not been resolved so we are hopeful the Supreme Court will grant us perhaps a new trial or a negotiation table,” Bull says. “At which time we would finally see closure to this long saga.”

Grand Council Treaty #3 held intervener status at the hearing to highlight the role of treaties in assessing equitable compensation and the importance of applying established treaty interpretation principles when considering rights and obligations in the context of Crown-Indigenous relationships.

“The role of treaties in cases such as this has often been overlooked by the courts and an injustice felt by one community in Treaty #3 is felt by all of us,” says Treaty #3 Ogichidaa Francis Kavanaugh. “I want the people of Lac Seul to know the Nation stands with them.”

“Indigenous people and our ancestors sacrificed a great deal in the treaty process and still, we have to beg the provincial and federal governments to uphold their treaty responsibilities,” Mamakwa says in a Dec. 7 press release. “The people of Lac Seul have been waiting more than 90 years for a resolution. Without honesty, fairness and respect from Ontario and Canada, what we have is not a relationship. It is abuse.”

Mamakwa says that is why he does not stand for the royal anthem or the Canadian anthem at Queen’s Park.

“I stand for respect and fair treatment,” Mamakwa says. “I stand for our ancestors: to demand respect for the treaties they signed. I stand for the fair treatment of Indigenous people so that our children can access education, clean water and safe housing.”