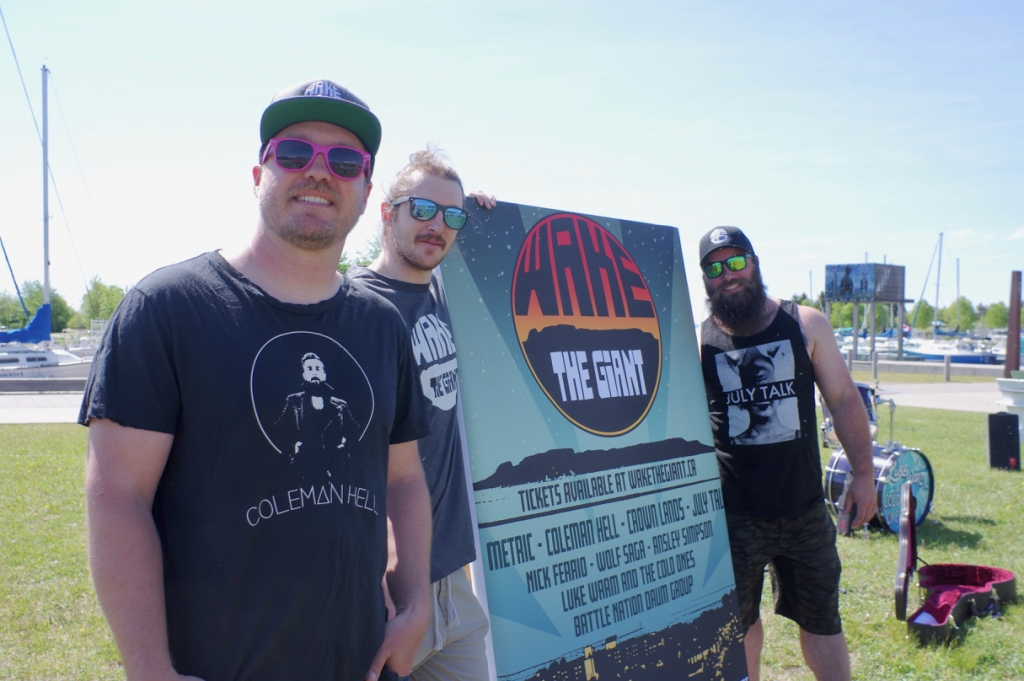 Wake the Giant organizers Greg Chomut, Sean Spenrath and AJ Haapa announced the performers for the Wake the Giant Music Festival, to be held Sept. 14, during a press conference at Prince Arthur’s Landing in Thunder Bay. Photo by Rick Garrick.

“Our goal is to bring different communities, cultures, age groups, music lovers and festival fans all together at one big event that bonds the community closer together,” says Sean Spenrath, First Nations student success program coordinator at DFC and a Wake the Giant organizer. “Wake the Giant Music Festival has a goal to promote Indigenous artists, and bring attention to exciting new young artists who are pushing the boundaries yet honouring tradition.
It’s all about celebrating Wake the Giant and creating a welcoming community.”

The music festival will also include a live art installation, cultural performances on a second stage and many local food vendors on site.

“We hope the Wake the Giant Music Festival challenges audiences to expand their understanding and appreciation of culture and music,” says Greg Chomut, a teacher at DFC and a Wake the Giant organizer.

Spenrath says the idea for the music festival came about after DFC students recorded a song with July Talk about two years ago.

“It was such a unique experience for not only the students but the staff as well,” Spenrath says. “The students finished recording the song in April of last year, and the song actually came out in December called Mourning Keeps Coming Back. It is available on iTunes and Spotify, and if you download it, the kids actually receive royalties.”

Spenrath says a couple of other events will also be held before the music festival during Orientation Week, with The Amazing Race scheduled on Sept. 12 and The DFC Experience on Sept. 13.

“We are going to be flying in 150 kids from the remote communities that we serve, for a total of 300 kids participating in Orientation Week,” Spenrath says. “So (with) The Amazing Race … the kids are going to be running around town learning how to use the transit system.”

“It’s kind of like school taken to a rock star level,” Spenrath says. “Bands that are performing at the festival the next day will actually be leading the workshops for these kids. How often do you get to work with rock stars in a workshop — it’s like the best thing ever. It’s one of the greatest welcomes to Thunder Bay that I think we could give these kids that are coming from up north.”

“And that number is rising every day,” Spenrath says. “So now we have a new goal, and that goal is 4,000. We want to sell 4,000 tickets by this September for the music festival.”

Spenrath says people who attend the music festival will have the opportunity to welcome the 300 students who are participating in Orientation Week to the city as they will also be attending the music festival.