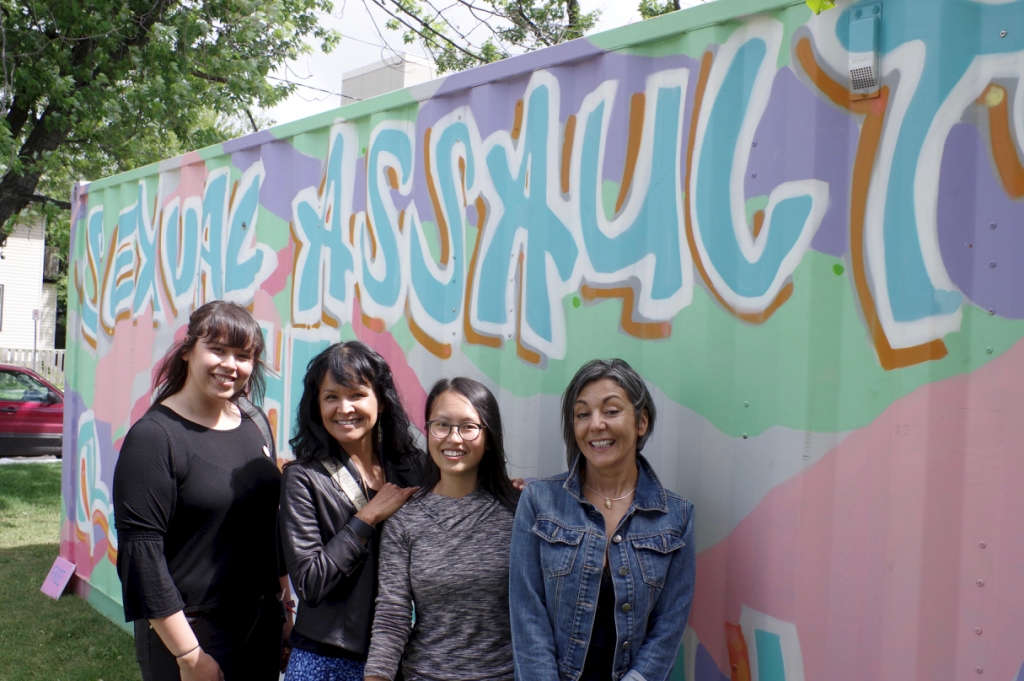 “I am only one of many, so I will be having guests come in each week that are also local artists,” Derosier says, adding that an Elder will also participate. “We are going to be creating a piece of art that will be talking back to our experiences as Indigenous women with sexual assault and violence and sexual assault and violence towards our land.”

Derosier says the presence of the Sexual Assault The Roadshow shipping container art gallery is making a statement at its location in Paterson Park, near the Thunder Bay Courthouse, where it will be open daily from July 26-Aug. 26. Public viewing hours are posted on the Sexual Assault The Roadshow Facebook page at: www.facebook.com/sexassaultroadshow.

Johnson looks forward to hosting the Sexual Assault The Roadshow for two days in August.

“I’ll be here just showing people around the exhibit and explaining a little bit about what the artwork is about and the effects on women, children and men as well (from) sexual assault and sexual violence and how that all leads to the work that I do: the women that are missing and the women that are murdered,” Johnson says. “I’m glad to be taking part in this (and) look forward to dropping by here every now and then and seeing how it is going.”

The Sexual Assault The Roadshow is a community, participatory traveling art gallery that is set up in an about six-metre by 2.5-metre wide shipping container. Funded by the Ontario Arts Council, the gallery visited 17 cities and areas across the province since it was established in 2016 by project founder/sexual assault activist Jane Doe.

“These Indigenous women all have their own stories, all have their own experiences and bring that to the container,” says Denise Bolduc, artistic director of the Sexual Assault The Roadshow Northern Tour. “I think it will give them more strength too and more pride and give them the power to share their stories more, which needs to happen, and to support other women.”

Jayal Chung, northern tour coordinator and ambassador for the Sexual Assault The Roadshow, says the focus of the Northern Tour is to centre the Indigenous experience.

“It is so important to be here in the park,” Chung says. “The way in which art brings people together, it’s really exciting to have the community come together and support this and see the art.”

Cynthia Edwards, northern tour associate for the Sexual Assault The Roadshow, says her role is to support the local participants and to guide them through the exhibit.

“When I first went in there it was really overwhelming at first, because sexual assault is something no one talks about,” Edwards says. “To have it in a container here in Thunder Bay is intimidating, but it’s needed.”

In addition to the Thunder Bay stop, the Northern Tour is also scheduled for stops in Kenora, Sault Ste. Marie and Manitoulin Island.