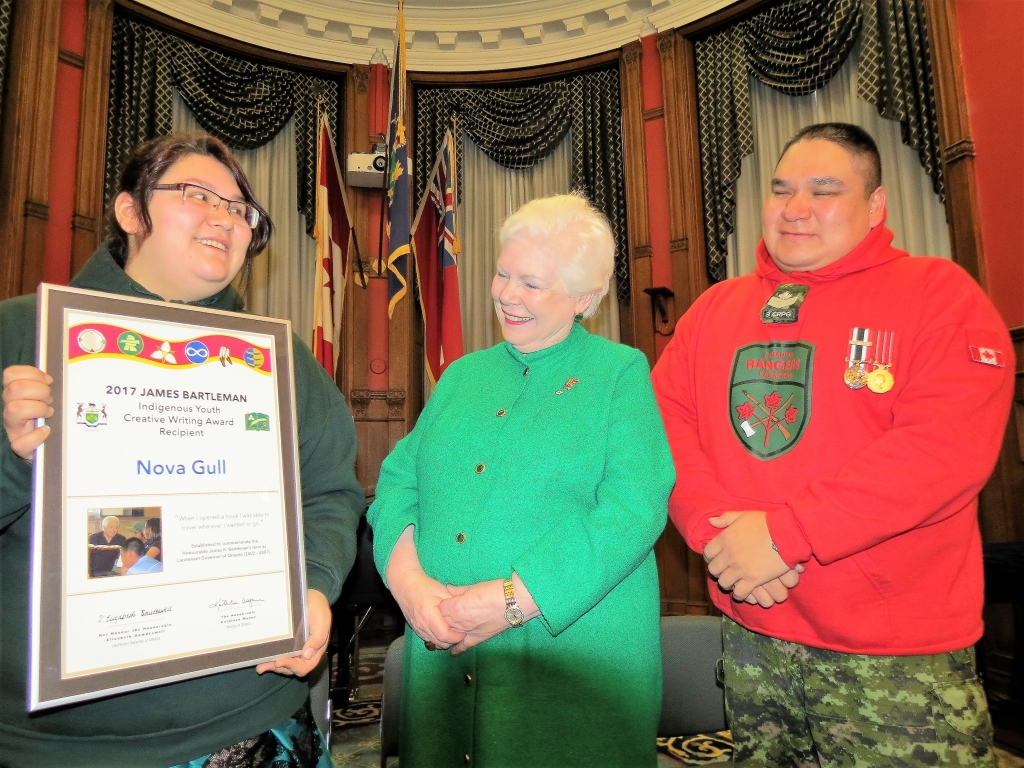 A last minute decision to submit a poem for a writing competition has won a Junior Canadian Ranger from the remote Cree community of Peawanuck a prestigious Indigenous writing award.

“I’d wrltten a couple of poems before,” said Junior Ranger Nova Gull, 16. “And then I wrote (the winning entry) and everyone liked it. At the last moment, we decided to enter it for the competition.”

That required typing it out, putting it an e-mail to Timmins, where it was printed, and rushed to a mail box just before the midnight deadline for entries.

“Nova’s poem ‘Where’s Our Voice?’ highlights the lack of attention shown towards Indigenous issues,” said the citation for her winning entry, “and aims to bring awareness to what has happened to Indigenous people in Canada.”

The poem was one of five entries that received a James Bartleman Indigenous Youth Creative Writing Award from Ontario Lieutenant-Governor Elizabeth Dowdeswell in a ceremony at Queen’s Park in Toronto. Nova’s father, Matthew Gull, the Canadian Ranger sergeant commanding the Ranger patrol in Peawanuck was at the ceremony, along with Moses Gull, her grandfather, and other members of her family, including her sister, Aurora, 14, who won a similar award last year.

The annual awards were created by the Province of Ontario in honour of Mr. Bartleman, who was Ontario’s first Indigenous Lieutenant Governor from 2002 to 2007.

The recipients each received a scroll and a cheque for $2,500? Asked what she was going to do with the prize money, Nova said: “That’s a secret.”

She and her sister Aurora are attending high school in Timmins.

The other winners were Ava Pauline Morin, 11, an Ojibway living in North Bay. Her citation said her personal essay emphasized “the importance of self-confidence and embracing who you are. She encourages readers to follow their own path and always look toward the positive side of life.”

Mike-Anthony Atlookan, 14, an Ojibway living in Thunder Bay, was cited for his essay “Why are we different?” which was a “response to the violence and discrimination that exists in the world. In his essay, he wonders why people are compelled to hate others based on small differences when there is so much more that makes us similar.”

The youngest winner was Kendra Kitchikake, 9, an Ojibway from Wikwemikong. “Kendra’s piece describes the healing tradition of the Jingle dress and its ceremonial dance,” said her citation. “She tells the origin of the tradition, the meaning conveyed in the motions of the dance and the reason why the Jingle dress is special to her.”

Sydney Flett, 19, an Oji-Cree living in Kenora, won for a collection of poetry that “is a personal and deeply honest reflection on her life and her struggle with depression, harassment, and violence. Sydney’s words create powerful images of both past trauma and her own inner strength.”

The winning entries contained essential content for “bringing people together and understanding each other,” said Lieutenant Governor Dowdeswell. They are, she said, “stories that build bridges between people.”