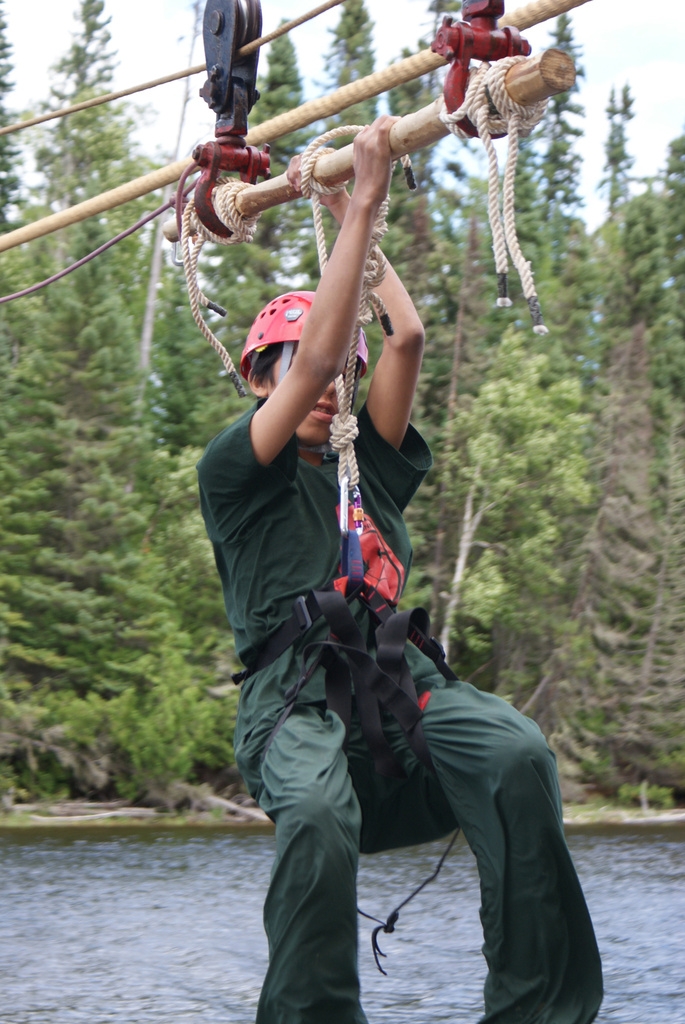 The training exercise may have well been named Camp Zoom as Junior Canadian Rangers rode a zip line between trees.
It was one of the most exciting aspects of Camp Loon 2010, explained Mike Hunter, a Canadian Ranger from Weenusk who was one of the many who enjoyed the ride across the river.
“It’s something that kids just love to do,” Hunter said “It was really awesome, I tell you. We did different things, the first time they just hung on but you can spin around and hang upside down and try to touch the water.”
The Junior Canadian Rangers (JCR) in Hunter’s group went across the zip line about five times each during their July 14 stint at the zip line site.
“It was fun, real fun,” said Barry McKay, a JCR from Kitchenuhmaykoosib Inninuwug who rode the zip line five times. “You get tied up to a string tied on to a log and you have to hold on to the log too.”
The zip line was stretched between two trees on each side of the river, with the takeoff platform set high on a tree on a high bank with additional anchoring set deep in the earth to stabilize the tree, while the landing site was on a lower bank on the opposite side of the river.
Shannen Winter, a JCR from KI, and her group of JCRs took their turn on the zip line on the afternoon of July 15.
“I was a bit nervous at first,” Winter said after completing her first ride across the river. “I liked it, I wasn’t nervous (afterwards).”
Winter also enjoyed playing lacrosse at the campsite and attending the Fire Department in Geraldton during her 10-day stay at Camp Loon, which cost about $518,000 for preparation and operation expenses and transportation to and from the site north of Geraldton.
The July 12-21 camp involved about 141 JCRs attending from 15 Nishnawbe Aski Nation (NAN) communities, 44 Canadian Rangers from 18 NAN communities, 20 full-time Canadian Forces staff, 14 full-time Canadian Ranger staff from the Canadian Ranger headquarters, a number of civilian staff from the Municipality of Greenstone and one civilian escort who had previously been a JCR and was sworn in as a Canadian Ranger July 14 during a special evening ceremony.
A group of nine JCRs were also introduced as newly-minted JCR staff during the camp.
“We wake up the JCRs, we get them ready, tell them what we’re doing today and the next day, tell them to bring all the stuff they’ll need,” said Shairose Tait, a JCR staff from Sachigo Lake who has been a JCR for the past four years. “It’s like you’re a role model.”
Although Tait now has a leadership role as a JCR staff, she still has to do all the activities and safety training the other JCRs participate in, such as canoeing, boating, off-road biking, ATV riding, archery, rifle range, sports, traditional crafts and riding the zip line.
“I’m the type of girl to stand up for what I do,” Tait said. “I follow the rules.”
Tait still has a good relationship with the other JCRs since she was named as a JCR staff.
“They respect me,” Tait said. “I just don’t stand around. I’ve got to do what they do.”
Brendan Sawanas, a JCR staff from Sandy Lake who has also been a JCR for the past four years, also finds his relationship with the other JCRs has not changed since he was named as a JCR staff.
Sawanas has plenty of experience in leadership and camping, having participated in three Camp Ojibways in Sioux Lookout as well as the four Camp Loons.
“I teach kids how to canoe during summer (at Sandy Lake’s) diabetes camp,” Sawanas said.
Capt. Mark Rittwage, Camp Loon commandant and the Canadian Rangers deputy commanding officer in Ontario, said the introduction of the JCR staff will encourage the JCRs to follow through with their daily activities.
“Now they are looking at somebody that is closer to their age,” Rittwage said. “When they say you have to roll your sleeping bag back and you have to clean your tent up, they are going to listen.”
The Canadian Rangers usually begin planning the upcoming Camp Loon about a month after the previous camp ends.
“We look at the new training ideas, things like the zip line,” Rittwage said, explaining the zip line across the river was designed and installed by a team of engineers from the Canadian Forces base in Petawawa.
“We will take every JCR that wants to come and as a result you will see the senior JCR staff, some of them have been here four times before, and we are now employing them and paying them in a capacity like as a camp counsellor so they are mentoring the younger kids,” Rittwage said.
Ricky Meeseetawageesic, a JCR from Eabametoong who attended Camp Loon for the first time, enjoyed his off-road bike training experience along trails through the woods over jumps, ramps and a teeter-totter.
“It was a great experience,” Meeseetawageesic said on the evening of July 15 after completing the off-road bike course for a near-record seven times.
George Duncan, a Canadian Ranger from Muskrat Dam who is attending Camp Loon for the first time, said it is important to help the youth during the different activities at Camp Loon.
“I love it, I love working with the kids,” Duncan said. “You have to be patient with them, and that is what we are doing.”