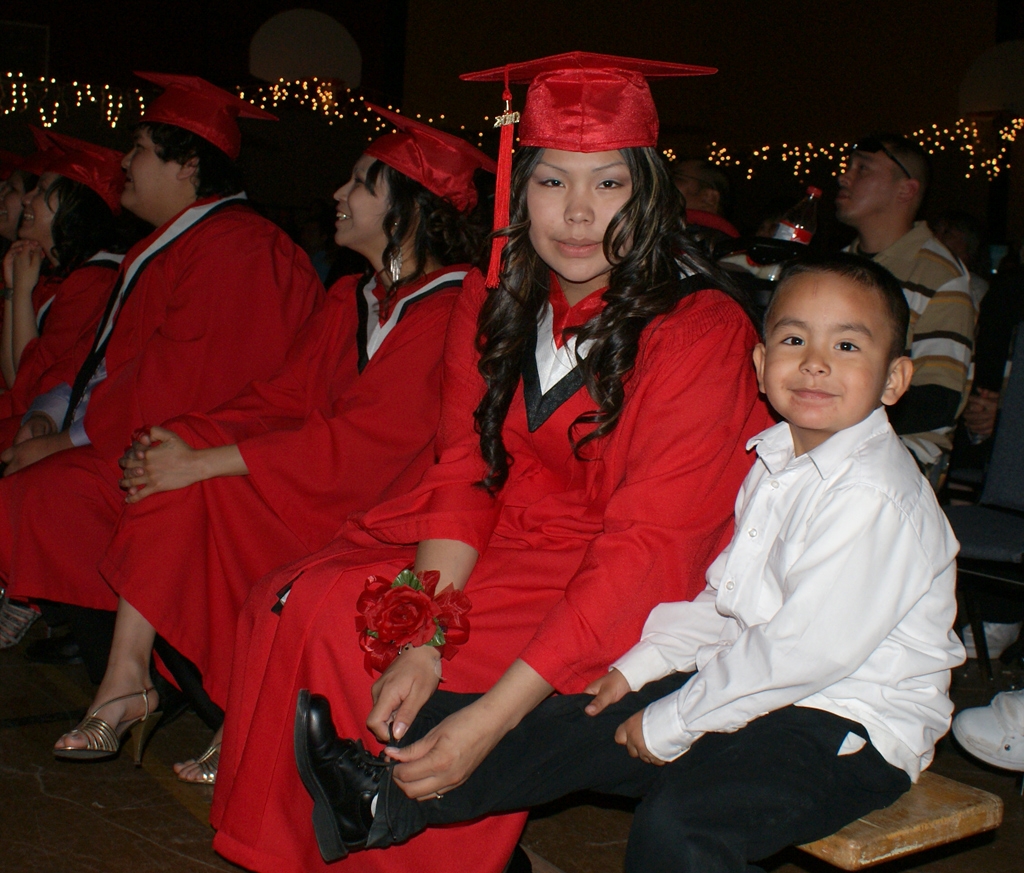 Sachigo Lake’s Sonia Tait wants to follow her lifelong dream of nursing after graduating from Dennis Franklin Cromarty High School.
“I always wanted to be a nurse when I was young,” said Tait, who has persevered more than most high school students by raising two sons while continuing with her high school studies. “It was kind of hard and easy. I got lots of support at the school.”
As she relaxed with her two sons outside on DFC’s school grounds after the Dreams Taking Flight graduation ceremonies were over, Tait spoke about her goals and her plan to study nursing this fall at Red River College in Winnipeg.
“I want my sons to have a better life,” Tait said.
About 180 people gathered May 11 at DFC to celebrate the achievements of Tait and nine other graduates: Brittany Angeconeb, from Bearskin Lake, Tanya Barkman, from Sachigo Lake, Pamela Beardy, from North Caribou Lake, Michael Mamakwa, from Kingfisher Lake, Tiffany McKay, from Kitcheuhmaykoosib Inninuwug, and Correen Kakegamic, Jonathan McKay, Kristen McKay and Jemima Meekis, all from Sandy Lake.
After the ceremony, Jonathan McKay described his plans to start his own business after completing post-secondary studies in business.
“I want to own my own business in Sandy Lake, a sports business,” McKay said. “In college I’d like to take business administration. Right now I have applied for business marketing.”
McKay developed his interest in business after participating in a Paul Martin Aboriginal Initiative entrepreneurial mentorship program at DFC.
“It’s what I want to do with my life,” McKay said.
Tiffany McKay is planning to study Native Child and Family Services at Confederation College in Thunder Bay.
“I like to help people, I like to talk to people, I like to get to know people,” McKay said.
Correen Kakegamic is planning to attend Confederation College this fall.
“I’ll be taking general arts and sciences for a year,” Kakegamic said. “After that, I’ll probably go into teaching. I like working with youth.”
Kakegamic enjoyed her five years of study at DFC.
“They’re really awesome people here and everything they do for students is awesome,” Kakegamic said. “They really helped me here … through all my studies.”
Northern Nishnawbe Education Council executive director William Dumas congratulated the graduating students during the graduation ceremonies.
“This is a big victory for all of us – to see them make it to this level,” Dumas said. “We know this is another beginning for our youth.”
Dumas encouraged the graduates to remember their dreams and to look towards the future.
“It is not going to be a bed of roses or road of roses – there will be some trying times,” Dumas said. “For the graduating class, stay focused on what you want your dream to be. If you stay focused on that dream, your spirit will guide you there.”
DFC principal Jonathan Kakegamic encouraged the graduating students to follow their dreams into the future.
“I remember one graduate, one lady this last August,” Kakegamic said, describing how the student knocked on his door and told him she wanted to attend DFC and graduate with her Grade 12 diploma. “She paid her way out here on her own. That is a story of determination.”
Kakegamic also spoke about another graduate who overcame her fear of speaking in public.
“She was so scared to speak in front of the public,” Kakegamic said. “She was terrified, but now she is our valedictorian.”
Valedictorian Kristen McKay spoke about her time at DFC and thanked the staff and teachers for their encouragement.
“These past couple of years have been awesome,” McKay said. “We have all made friends that we will know for a long time and we all have memories we will never forget.”
McKay stressed the “great impact” the staff, teachers and principals had on the students’ lives while at DFC.
“You gave us … someplace to call when we were wanting a hug,” McKay said. “You were someone to talk to when we were feeling down. You helped us get back on track when we were behind. You helped us become determined to make it to this day.”