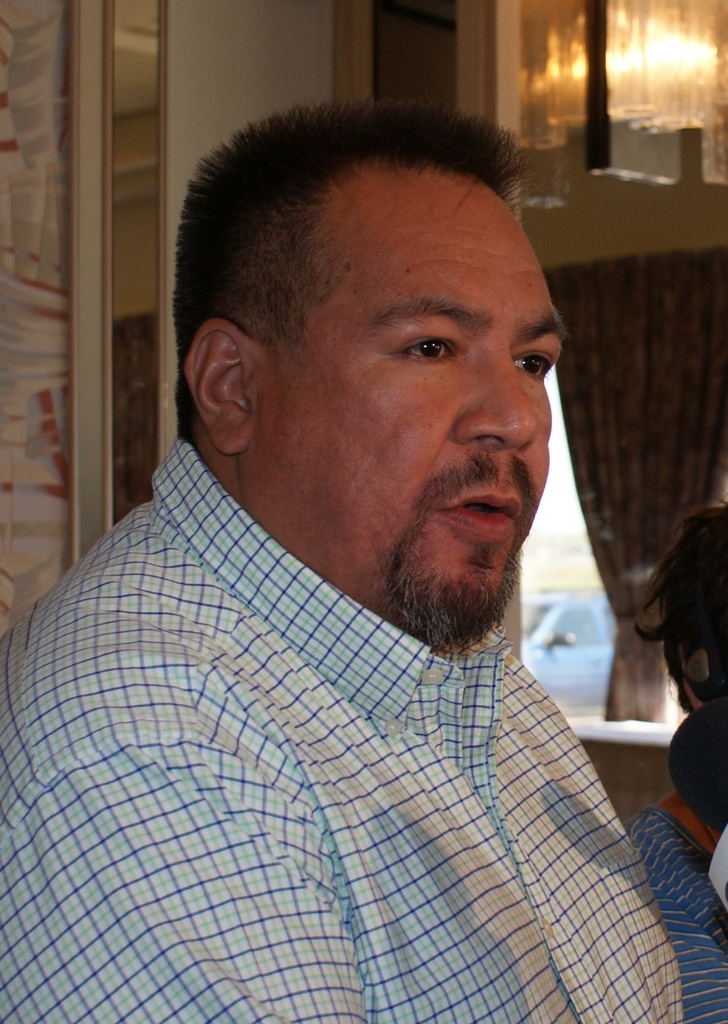 Different funding levels for on-reserve and off-reserve First Nation students were raised by chiefs at the Nishnawbe Aski Nation Keewaywin Conference.
“In our community if we were to send a student to Timmins, under the tuition agreement the (federal) government would fund about $18,000 per head,” said Kaschechewan Chief Jonathan Solomon during a break on the first day of the June 8-10 Keewaywin Conference in Sandy Lake. “But when it comes to educating our own in our own community, it goes down to between $6,000 and $8,000.”
Solomon said this could be a factor in how youth feel about themselves.
“They know they are not getting what they need to move forward in life,” Solomon said. “Though we may graduate students in our community, once they enroll in a college setting, their grades are not up to par in regards to the requirements for whatever program they were going to take so they end up taking an upgrading course. These students just came out of high school so you can see the unbalance of the quality of education they are getting looking at the provincial system.”
NAN Grand Chief Stan Beardy said education is one of the major opportunities for First Nation youth to find success.
Beardy said many youth work hard to achieve good marks to get into a postsecondary setting, but due to lack of funding only a number of students receive postsecondary funding each year and because there are high unemployment levels in the communities there are no other sources of funding for those children.
“So if they are told there is no funding and they have to wait a number of years, it is just devastating,” Beardy said.
“Obviously we had a treaty arrangement and we were promised, we were assured our children would be able to get the education they needed, but that is not happening.”
Beardy said the federal government delivers programs on a policy, with no minimums and no standards.
“On the provincial side it is legislated, you have standards, you have minimums,” Beardy said. “Of course when you have a standard, you have the resources to make sure that the standards are maintained. On our side there is no legislation to deliver the education program on reserves, it is not even a policy.”
Margot Geduld, senior communications advisor with Indian and Northern Affairs Canada (INAC), said in an e-mail reply there are challenges in making direct comparisons in per capita funding between jurisdictions. She said the $1.4 billion provided by INAC for elementary and secondary education does not include the amount of funding provided for band employee benefits, which pays for basic employee benefits, funding to support bands for local government and administration, school construction and operation and maintenance costs.
“Any comparisons also need to take account of important differences in schools such as their geographic locations and relative size, which are factors that determine how much funding a school receives,” Geduld said.
“Simply increasing funding for First Nation education without achieving greater comparability between band-operated and provincial school systems will not necessarily lead to comparable outcomes.”
The Assembly of First Nations (AFN) released a discussion paper June 21 titled Taking Action for First Nations Post-Secondary Education: Access, Opportunity, and Outcomes prepared by a panel of First Nation experts on postsecondary education.
“For too long, outside analysts and third parties have influenced First Nations education policy in a way that does not reflect our realities and our needs,” said AFN National Chief Shawn A-in-chut Atleo.
Atleo said the discussion paper will be presented at the upcoming AFN Annual General Assembly as well as to the Government of Canada, based on the direction of First Nation leaders.
Although First Nations have struggled with under-funding and outdated policy and legislative frameworks, Atleo said they have been able to make gains and achieve a degree of success.
“Through First Nation controlled education, we have progressed from the dark days of the residential school era,” Atleo said. “The credit goes to the hard work of all our people working in the education field.”
Deputy Grand Chief Terry Waboose raised the urgent need for better education levels within the communities during his annual report to the gathered chiefs.
“We’re falling behind and even further behind with our education system,” Waboose said. “At the end of the day we have to give our youth hope.”
Geduld said the Government of Canada considers education a key to success and prosperity in today’s knowledge-based economy, noting that in 2008 the federal government committed $268 million over five years to the Reforming First Nation Education Initiative, with a further $75 million in ongoing funding.
“This initiative includes both the First Nation Student Success Program and the Education Partnerships Program, integral programs in the Government of Canada’s ongoing commitment to improve educational outcomes for First Nation learners,” Geduld said. “In addition, Budget 2010 committed $30 million over the next two years to support an implementation-ready tripartite education agreement for K-12, ensuring that First Nation students benefit from comparable education and achieve comparable results whether the classroom is located on or off reserve.”