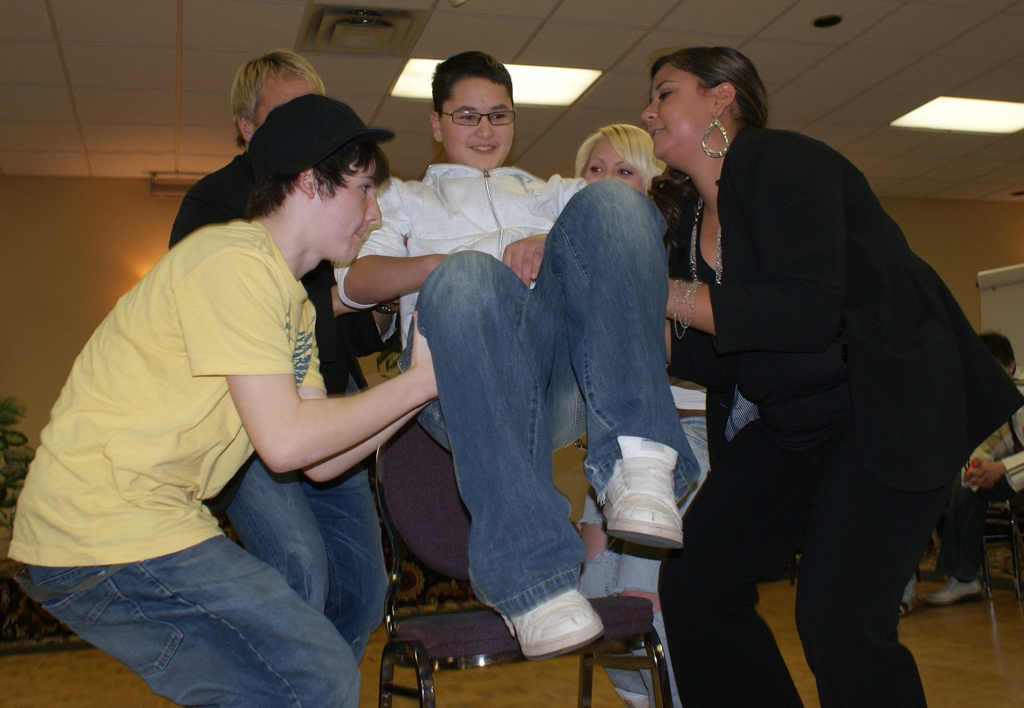 A group of Dilico and Children’s Aid Society youth gained confidence and self-esteem through a recent weekend event.
“We did a fashion show, we did pictures, we had our hair done, our face cleaned off, makeup done, all in preparation for the fashion show,” said James Fisher, a youth originally from Long Lake #58. “I’m very proud of myself.”
Fisher said he loved participating in the three-day Youth Confidence Workshop, which was hosted by the Crown Ward Education Championship Team and Turtle Concepts at the Best Western Nor’Wester Hotel & Conference Centre near Thunder Bay in late March.
“I wish I could stay forever,” Fisher said. “I love it here.”
Turtle Concepts owner Dave Jones said the group of about 40 youth loved the fashion show and photo shoot.
“It was way more than I even expected,” Jones said. “It really worked well, amazing well. I was really impressed on how the students here were able to move forward so quickly. They do know the difference between right and wrong, they do know how to get along, and they do know how to be polite. We allowed them to show us all that great stuff and it was so easy for them. It was three easy days of letting students be who they are.”
Jones said the strategy was to allow the youth to know how good they are.
“We wanted to allow great moments and to allow them to know how good they are,” Jones said.
Susan Jones, manager of children’s services at The Children’s Aid Society of the District of Thunder Bay, was amazed to see how well the youth were interacting with each other even though they had never met before.
“What I’m finding really neat is how they’re responding to each other,” Jones said. “Most of them have never met each other before, so the fact they are sitting together eating and talking together – that’s amazing to me.”
Jones said the youth were ready to go for the fashion shoot on the final day of the workshop.
“I saw so much excitement today,” Jones said. “When the kids came in they were pumped. They were just ready to go. The other thing I saw today was patience, because it was a long day and some of these kids are not normally patient kids but they were helping each other out.”
Elma Czernik, a foster parent, was surprised by the complete transformation in one youth during the workshop.
“Today his hair is all different, for first time in his entire life he’s wearing jeans, regular shoes, his head is up,” Czernik said.
“It’s a complete transformation and it only took three days. I’m just hoping he keeps up with it tomorrow. Even the way he talks, everything is completely changed … it’s changed him hopefully forever.”
Czernik said it’s not just about putting on clothes and making your hair different.
“It’s about feeling good about yourself from the inside out,” Czernik said.
The Crown Ward Education Championship Team, a partnership between Dilico Anishinabek Family Care, The Children’s Aid Society of the District of Thunder Bay, Lakehead Public School Board, Thunder Bay Catholic School Board, Lakehead University and Confederation College, hosted the workshop for youth from 12-20 years old to focus on development of leadership skills, communication skills, self esteem, parenting, at risk youth alternatives and cross-cultural training.
Kyle Mueller, a student working for the Children’s Aid Society, was surprised by the youth’s turnaround.
“I’m seeing huge confidence building,” Mueller said, explaining he has been working with some of the youth as a student.
“Some of the children I’ve seen are kind of shy, a little reluctant to make friends.
Now that they are in a non-judgmental environment where everybody is friends, they just seem to blossom and come out of their shells. It’s really incredible.”