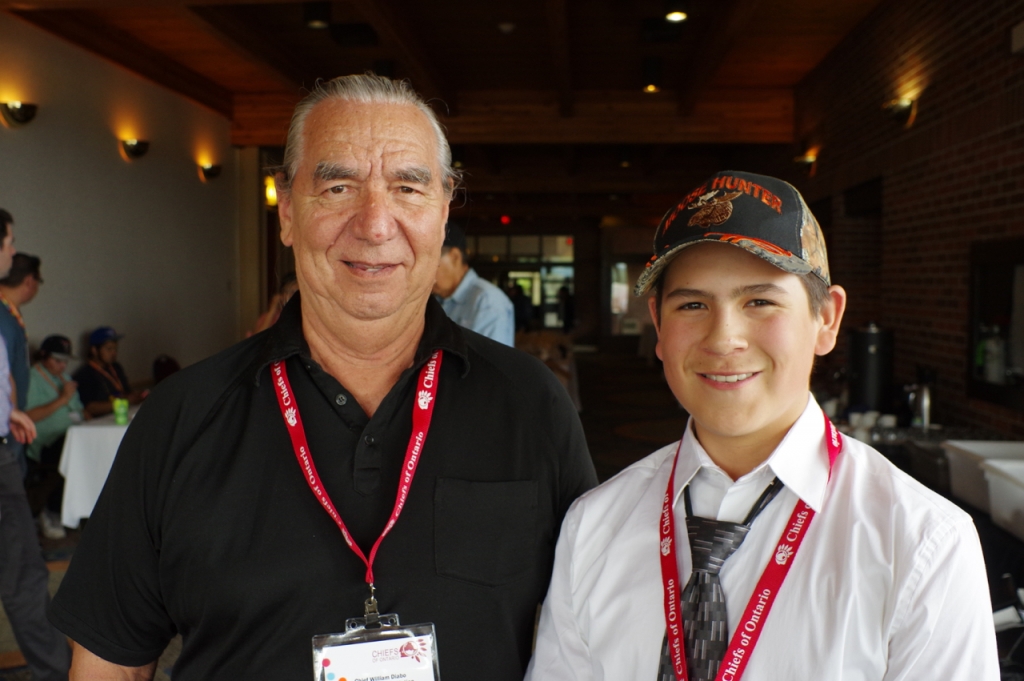 “I’m very honoured to be recognized by chiefs from everywhere in Ontario,” Chokomolin says. “And I’ve discovered that there’s new generations to come. Chiefs can see stuff in you that you cannot see yourself.”

Chokomolin was chosen by his community’s youth council to attend the AOCC. He encourages other youth to “keep on pushing” for their objectives.

“It’s good to see a youth participating in our chiefs assembly,” says Magnetawan Chief William Diabo. “In my community I try to get youth involved and one thing I’ve asked them to do is follow me around for a day. It’s almost like being a chief for a day, but I haven’t had any takers yet.”

Grand Chief Alvin Fiddler led a moment of silence at the AOCC for the families of the seven students who died while attending high school in Thunder Bay since 2000.

“The leadership from across the region, from across Ontario just stood up to indicate their support for the motion calling for the full implementation of all the (Seven Youth Inquest jury’s) recommendations,” Fiddler says. “And they showed that support in front of the families that were here.”

Fiddler missed most of the first day of the AOCC due to the release of the Seven Youth Inquest jury’s verdict and recommendations at the Thunder Bay Courthouse.

“Tuesday (June 28) was the release of the verdict and the recommendations, so I committed to the families that I would be there with them until the end,” Fiddler says. “That was my obligation; that was my priority.”

The AOCC was hosted by the Independent First Nations with a focus on Youth Inspired Action for a Strong Future. Highlights included sector updates from Environment, Social Services, Justice, Education and Health as well as information on energy and infrastructure, policing and climate change.

Mushkegowuk Council Grand Chief Jonathon Solomon says the relationship with the newly-elected federal government was also raised during the AOCC.

“There’s been a lot of discussion around the new relationship with the government since October (2015),” Solomon says. “There’s a lot of anticipation that a lot of progress will be made in files that have been stalled for years and years.”

Regional Chief Isadore Day says most of the agenda at the AOCC was completed.

“There were opportunities for people to raise other issues,” Day says. “We accommodated people along the way. Our focus that we started off here with and the theme, our youth, and the strategic action including our youth, that remains our focus leaving this assembly.”

Days says there were 90 files brought to the floor during the AOCC this year, an increase from 20 major files at last year’s AOCC in Kenora.

“Our annual report was a book, essentially,” Day says. “This just goes to show that the amount of issues we have dealt with in the last year are immense.”

Day says a number of leaders raised the issue of restructuring.

“We need to look at restructuring in order to become effective in the work that is ahead of us,” Day says. “We will continue to do that work, and I believe in our next chiefs assembly, which will be this fall and other meetings prior to that, we will ensure that we make those changes and become efficient, effective and use our time in a way that gets the job done and we have the proper planning ahead of time.”

Day also acknowledged the leadership shown by Chokomolin as his community’s proxy during the AOCC.

“That’s the spirit by which we convened this session,” Day says. “To see a 13-year-old to hold the proxy for his community was inspiring. And it was quite indicative of where we need to go. We just need to continue supporting our youth.”