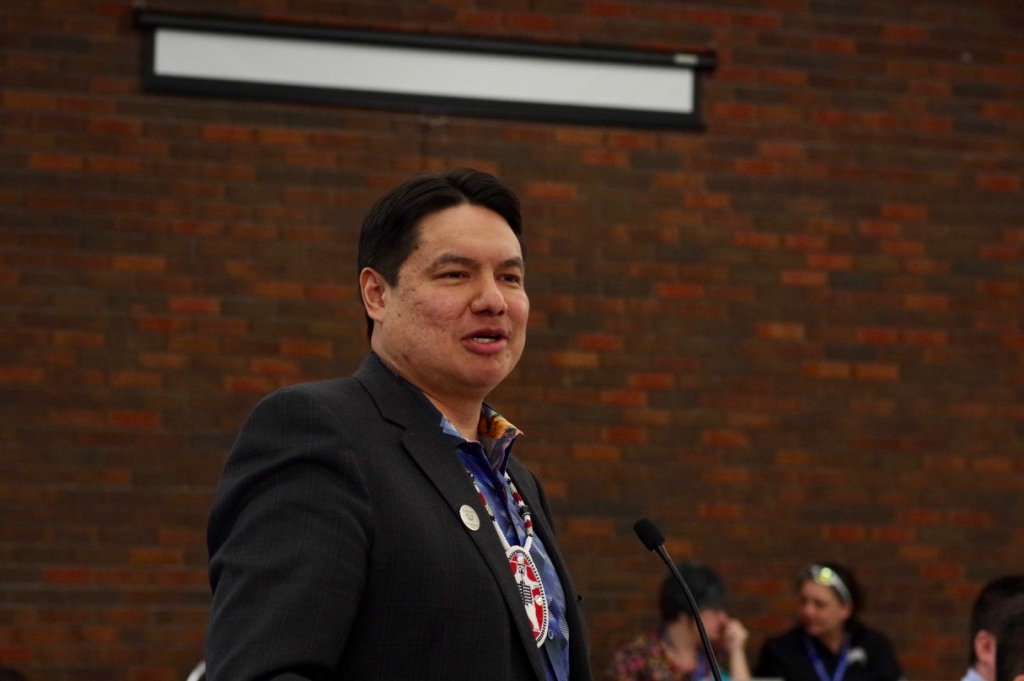 Grand Chief Derek Fox was encouraged with Superior Court of Justice Judge Susan Vella’s decision to grant an interim injunction to prevent any mining activities from being carried out in the Wiisinin Zaahgi’igan sacred area. Photo by Rick Garrick.

Ginoogaming has been granted an interim injunction to prevent any mining activities from being carried out in the Wiisinin Zaahgi’igan sacred area located within the community’s territory.

“We are encouraged that the Superior Court has recognized the inherent and treaty rights of Ginoogaming and has granted an injunction to halt mineral exploration activity in Wiisinin Zaahgi’igan,” says Grand Chief Derek Fox. “We acknowledge and congratulate Ginoogaming’s leadership for defending the rights of their nation and the land that has sustained them for generations.”

Fox says First Nations are the rights holders when it comes to jurisdiction over the land.

“Our treaty partners must honour and respect our inherent rights,” Fox says. “The land will be inherited by our children, and it is our sacred responsibility to protect it for their future. We look to the government of Ontario to honour its treaty obligation and do everything possible to engage with the community in a meaningful way. The work Ginoogaming has done has created an opportunity to set a precedent for protecting sacred land.”

Superior Court of Justice Judge Susan Vella’s decision states, in part v., that an interim injunction is granted in favour of Ginoogaming against Quaternary and Hard Rock, in accordance with the terms set out in this court’s reasons at paras. 153-155.

“She granted an injunction against Michael Malouf’s exploration companies, so that exploration work, on the basis that she found that we met the full test for an injunction,” says Kate Kempton, Ginoogaming’s lawyer and partner at OKT Law. “But rather than grant the longer term one at this point, called an interlocutory injunction, she granted a shorter term one for now and asked the parties to try to work it out.”

Kempton says the decision calls for the parties, Ginoogaming and the Crown, to go back to the court in January 2022 if they cannot work it out.

“She certainly allows for the possibility that if we don’t work things out and we have to go back in January, that at that point she might grant the full longer term injunction that we sought,” Kempton says. “We have certainly put before Ontario starting over a year ago now the request to resolve this permanently by doing something they’ve done before which is to buy out the mineral claims in the area and then permanently withdraw the area from mineral explorations. We are saying that this is a whole area that is sacred and of huge keystone cultural importance to Ginoogaming, it’s not a matter of just carving out tiny little pinpoint areas to protect little pinpoints — it’s respectfully a larger area than that and has extreme importance.” Ginoogaming had been seeking an interlocutory injunction against Malouf and his prospecting companies, The Quaternary Mining and Exploration Company Limited and Hard Rock Extension Inc., to restrain them from carrying on any mining related exploration activities on the territory hereinafter defined as the Wiisinin Zaahgi’igan; an interlocutory injunction against William Kerr restraining him from carrying on any mining related exploration activities on the land hereinafter defined as the Wiisinin Zaahgi’igan; and an interlocutory order against Her Majesty The Queen in Right of Ontario and the Director of Exploration declaring that no approval of the Caouette Permit Application made by Mr. Kerr should be made or that if it is approved, the issuance of such an approval in the circumstances would constitute a breach of the Crown’s duty to consult and accommodate Ginoogaming.