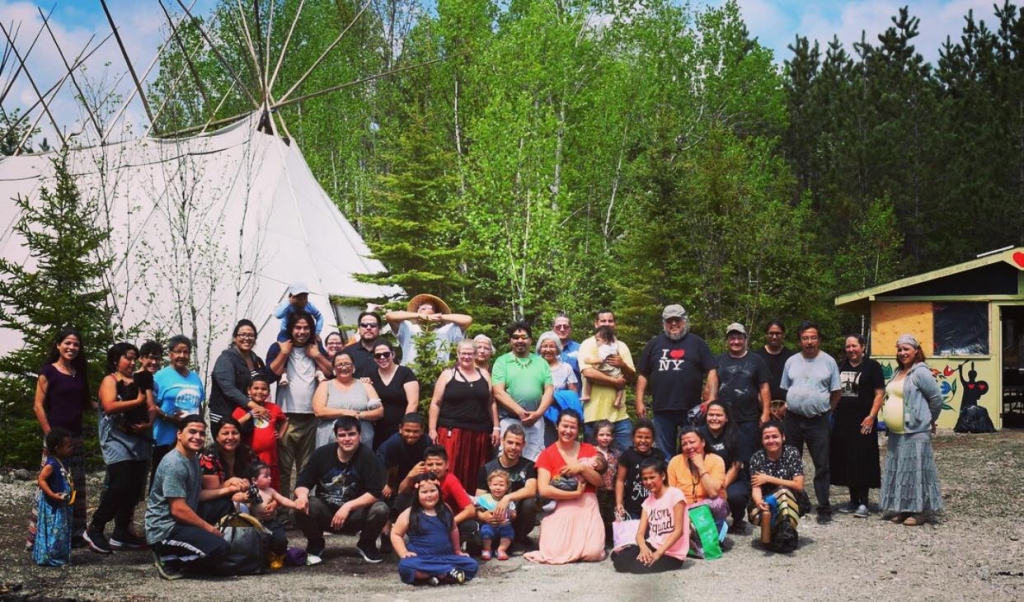 Belcourt says the camp has had a variety of participants over the past year, including one young family who stayed at the camp during the winter.

“We went out with some Elders and some youth and held a ceremony on the spot within traditional Anishinabek territory,” Belcourt says. “We had a ceremony to introduce ourselves to the spirits of the land, and after that we started building.”

Belcourt says the camp provides people with the opportunity to learn Anishinabemowin while on the land.

“When we look at our education that let us survive for thousands of years on the land, I find that education is of very high importance and high value,” Belcourt says. “We are at kind of a really important point in our history as Indigenous nations where we are seeing such a rapid loss of our languages that we simply can’t rely on programs and services or government initiatives to turn this around for us. This is something we have to take on ourselves and not look at funding but just go do it.”

Murdoch, an Indigenous storyteller and traditional knowledge holder, says there is a huge grassroots movement to revitalize Indigenous languages all across North America.

“We decided to set up a language camp, a language nest, to ensure that our languages survive and to provide a nest, a living place, for our young people and also a place for our Elders to come and teach,” Murdoch says. “We really believe in connecting young people and Elders together so that the language can be passed on.”

Murdoch says the Elders provide language lessons based on the participants’ activities throughout the day.

Murdoch says there are currently about half a dozen young people who are participating in the camp.

“As soon as June comes to an end, we can double that,” Murdoch says. “We’ll probably have about a dozen young learners and about a dozen adults learning. They will come for the summer and it will be all language immersion with the Elders — it will be great.”

Murdoch says the participants “love” the opportunity to learn Anishinabemowin at the camp.

“Unfortunately, we are at the tipping point,” Murdoch says. “We have to make sacrifices if we are going to save this language.”

Belcourt says people who are interested in participating can drop by the camp, which is located about 20 kilometres north of Elliot Lake.