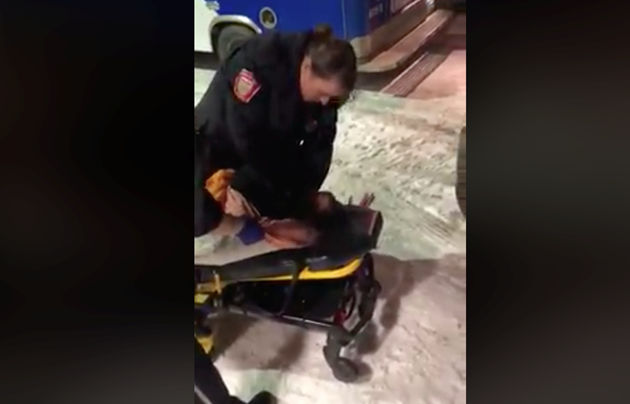 A video being shared on social media appears to show a Thunder Bay Police Service officer striking an individual on a stretcher.

“We are outraged by the actions of the officer depicted in this video. We do not know all of the details that led to this incident, but there is simply no justification for such violent and callous treatment of a youth in such a defenseless position,” said Grand Chief Alvin Fiddler. “Such actions by the police, whatever the cause, must be fully independent authority and the results made public by the Chief of Police.”

The brief video, posted to Facebook Sunday December 2, appears to show an officer striking a youth restrained on stretcher next to an ambulance. The words “You’re going to the hospital” can be heard.

It is not clear why the youth, a 17-year-old from Nibinimik First Nation and student of the Matawa Learning Centre, required medical attention. Police officials have confirmed that an investigation has been launched but have not clarified if it will be independent of the TBPS.

The viral video has sparked outrage from First Nations across NAN territory, who have a long history of conflict with the city’s police force.

First Nation leaders called for the resignation of former Thunder Bay Police Chief J.P. Levesque following a report from the Ontario Independent Police Review Director (OIPRD) earlier this year that documented “substantial” deficiencies in the investigation into the death of Rainy River First Nations member Stacy DeBungee in 2015. Levesque also faced charges of breach of trust and obstruction of justice in an unrelated matter but the case was dismissed. He has since retired.

In November 2016, the OIPRD announced a systemic review of the Thunder Bay Police Service’s practices for policing Indigenous Peoples. Specifically, policies, practices and attitudes regarding missing person and death investigations.

The Thunder Bay Police Services Board is also under investigation by the Ontario Civilian Police Commission (OCPC), the statutory governing body for police boards in Ontario.