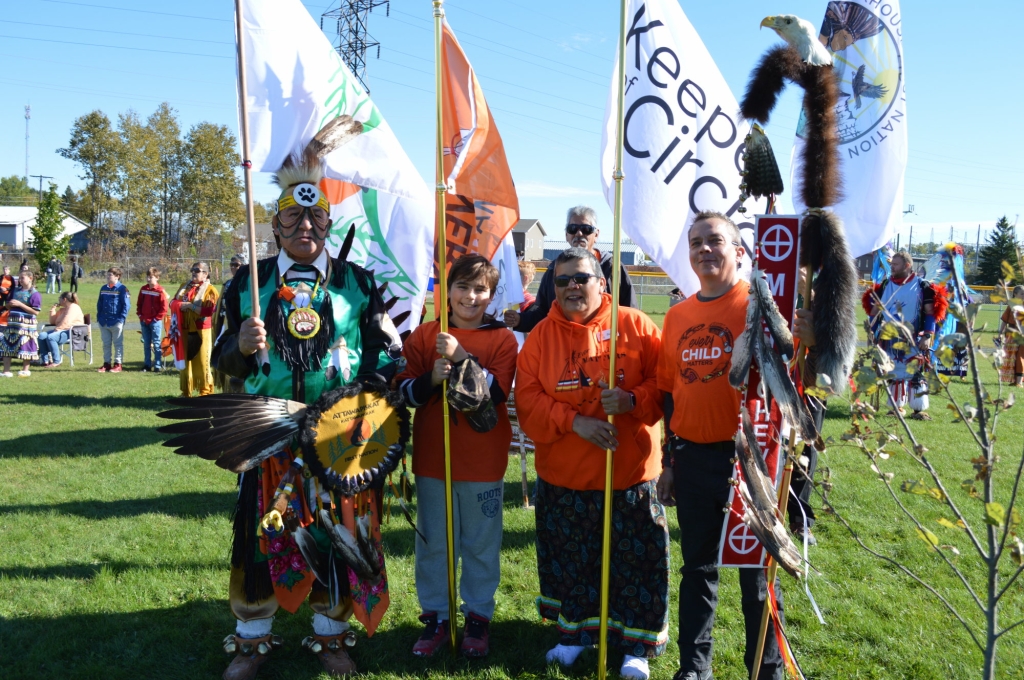 Northern Ontario featured the hugely successful Second Annual “Every Child Matters” Pow Wow in Kirkland Lake on September 30. The event which was held at Civic Park brought in over 2,000 visitors from Northeastern Ontario including the participation of children from schools from Kirkland Lake, Englehart and Temiskaming Shores. The gathering also brought performers, drummers and singers from across the north and Quebec.

As part of the day’s commemoration of the National Day of Truth and Reconciliation and acknowledgement of the residential school era, lead male dancer George Rose of Attawapiskat First Nation gave an emotional speech in Cree and English. He is a survivor of the notorious St Anne’s residential school in Fort Albany on the James Bay coast which he attended for seven years as a child in the late 1960s.

“I remember my treatment and the abuse I suffered at this place and the hardships many others around me endured including my mother and father. It is sad for me to remember but we are finding healing, especially by connecting to our culture, by dancing, by singing and by being part of events like this surrounded by so many young people. It is love for one another across all cultures and communities that can help us and give us all hope,” explained Rose.

The event was coordinated by the staff of Keepers Of The Circle led by Chelsea Daley and Brianna Julien.

“This was something our people couldn’t do a long time ago but to see such a big event today makes me feel really happy. I’m thankful to our supporters for all they’ve done but we are also grateful to our Elders and for me it is especially true for my grandmother Vina Hendrix-Landry,” said Daley.

Keepers Of The Circle led the organizing efforts of this event along with the support of Beaverhouse FN and Matachewan FN.

“I want to thank everyone who made this event possible. My heart is full today in seeing all the orange shirts here. It’s an important reminder of why we are here and it is my hope that all these educators will be able to pass on that history to their students so that they grow to understand what happened to our people,” said Berther Cormier, Executive Director of Keepers of the Circle.

“The sea of orange shirts and colours everywhere is very heart warming. It’s important for us to share the history of the residential school era with everyone, especially to young generations in an appropriate manner because it will bring about a more positive change for the country in the future,” commented Chief Wayne Wabie, Beaverhouse FN.

The event featured many vendors who sold traditional arts, crafts and food for visitors.

“This is a beautiful event for everyone and it shows what our people can accomplish when we all work together. It also shows how important today’s commemoration means to everyone and how we can share and pass on that history so that everyone can understand what happened to our communities,” said Councillor Tom Fox, Matachewan FN.

“It was great to see everyone here today and to see all these young people taking part in this event. This Pow Wow and today’s national day of remembrance is important because it recognizes not just the Indigenous children that were lost in the residential school era but also the Indigenous children that were denied their basic rights right up until today. It’s important for us to understand this history and the ongoing struggle to make things right” said Angus.