Edmund Metatawabin appointed to the Order of Canada 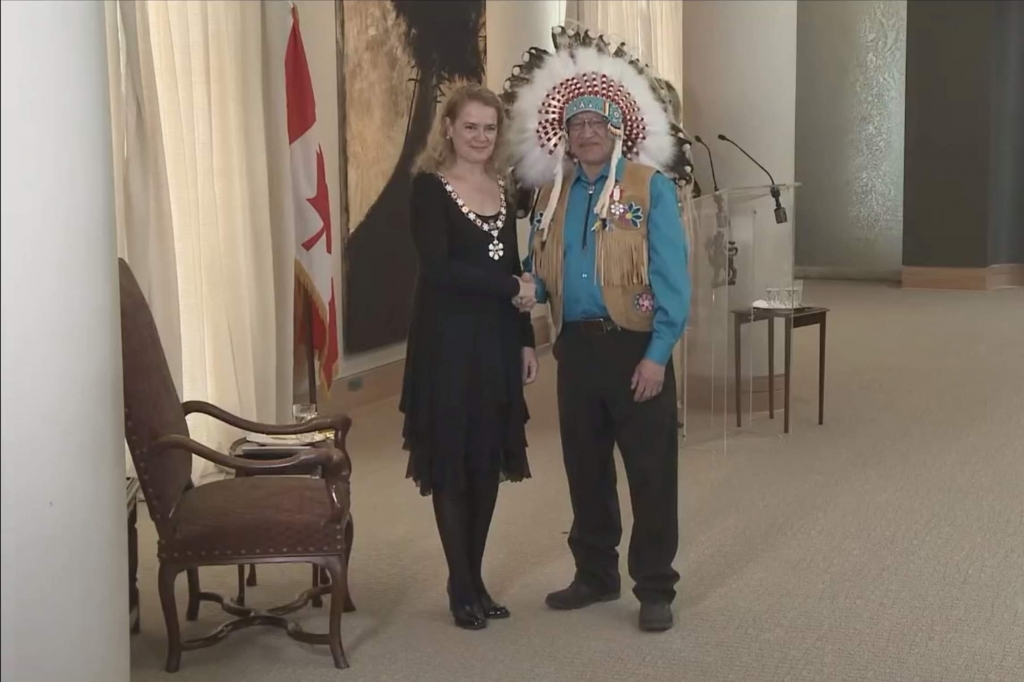 Screen shot of the live ceremony appointing Fort Albany’s Edmund Metatawabin as a Member of the Order of Canada on Feb. 12.

Fort Albany’s Edmund Metatawabin was appointed as a Member of the Order of Canada on February 12.

“The writings of author, speaker and teacher Edmund Metatawabin are a testament to the healing power of words. His 2014 memoir, Up Ghost River: A Chief’s Journey through the Turbulent Waters of Native History, chronicled his story of residential school abuse and his journey to recovery. His words have manifested into advocacy for fellow survivors, notably through the St. Anne’s Residential School Survivors’ Association. A former chief, he is a revered traditional knowledge keeper and mentor of the Fort Albany First Nation.”

“We have a survivors group called Peetabeck Keway Keykaywin,” Metatawabin says, noting that means Peetabeck Back to Healing. “We formed that group in 1992 to talk about residential school, not so much compensation — that was never discussed among our discussions. It was more a recovery, a reclamation of things lost, because we were looking at our children and grandchildren being uninformed about the simple rules of behaviour.”

Metatawabin says the residential school process resulted in children who were “terrified” with no knowledge of their background, minimal use of their language and no ceremonial activity.

“Everything is stripped away, so all you have is an empty individual,” Metatawabin says. “And tragically, you saw (them) downtown or wherever staggering down the road. That was the empty individual.”
Metatawabin says it will likely take about 100 years for First Nations people to recover from the abuses and loss of language, culture and identity they suffered through during the 100-plus years that residential schools were operated across the country.

“It’s going to be 100 years trying to recover from this effect because it was so ingrained in our grandfathers, our own fathers and us ourselves,” Metatawabin says. “Even the ones who were too old to go into residential school in the 1800s were being forced to obey certain rules of behaviour, not to do their ceremonies and to hide their pipes and to hide their bundles.”

Nishnawbe Aski Nation (NAN) Grand Chief Alvin Fiddler, on behalf of the Executive Council, congratulated Indian Residential School survivor and advocate Edmund Metatawabin, on being invested into the Order of Canada on Feb. 12.

“Edmund’s advocacy has been fundamental in ensuring that the federal government cannot suppress the shocking truth behind the residential school experience. It is fitting that Canada should recognize him with such an honour, and we extend our most heartfelt congratulations,” said Grand Chief Alvin Fiddler. “It has taken tremendous courage for Edmund to challenge the government to reveal the horrors of the Indian Residential School system. He is an outstanding advocate and we honour his dedication to helping survivors on their path to healing,” Grand Chief Fiddler said.

Metatawabin says people have been congratulating him about his appointment as a Member of the Order of Canada since it was announced in June.

(with files from Rick Garrick)