Canadian Rangers find snowmobiler who ran out of fuel 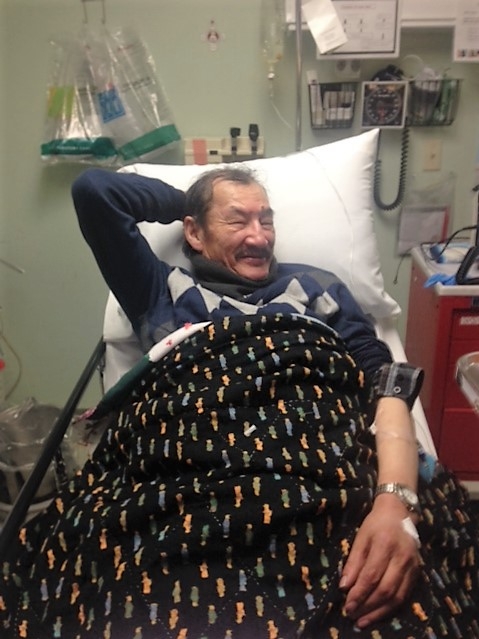 Canadian Rangers from two First Nation communities conducted a successful joint search on Wednesday for an overdue snowmobiler who ran out of fuel in temperatures that dipped to -33C with wind chills of -43C.

They found him after he had abandoned his snowmobile and had been walking in deep and blowing snow for two hours.

“He was very lucky,” said Sergeant Jamie Stirling, provincial search and rescue co-ordinator for the Ontario Provincial Police. “If the Rangers had not found him he could have died. Once again the Rangers did a good job.”

Moses Kakekaspan, 71, is a highly regarded elder in Northern Ontario and the priest at St. Peter’s Anglican Church in his native community of Fort Severn on Hudson Bay and Ontario’s most northerly community.

He left Peawanuck at 4 p.m. on Tuesday to travel the 180 kilometres back to Fort Severn by snowmobile. He expected to reach Fort Severn by 10 p.m. Sergeant Matthew Gull, commander of the Peawanuck Ranger patrol, contacted Rangers in Fort Severn at 11 p.m. and learned he had not arrived in the community.

The OPP asked the Canadian Army for assistance in organizing a search and two Rangers from Fort Severn – Sergeant Mary Miles and Ranger Sinclair Childforever – set out by snowmobile at 2.30 a.m. on Wednesday to find the missing elder. During the early morning hours the weather deteriorated with the temperature plunging and blowing snow making travel difficult. As the Ranger searchers neared Peawanuck they found faint snowmobile tracks that were apparently left by Mr. Kakekaspan. Low on fuel and exhausted by the difficult snowmobile conditions the Rangers kept going and arrived in Peawanuck.

Meanwhile, Rangers Aaron Isaac and Maurice Mack of the Peawanuck Ranger patrol had left to join the search. They quickly found Mr. Kakekaspan at 8.30 am. He told the Rangers the blowing snow had slowed him down and disoriented him. When he realized he was low on fuel he turned around to go back to Peawanuck but ran out of fuel. He had no survival equipment so he decided to abandon his snowmobile and try to walk to Peawanuck.

He had been walking for two hours when the Rangers found him about 20 kilometres from Peawanuck.

The Rangers used a portable heater and blankets to warm him and transported him to Peawanuck where he was admitted to the nursing station. “He’s resting up,” Sergeant Gull said. “He was a little tired and still very cold when he got there. The community really pulled together, giving him support and some warm food and warm drinks for him to hydrate.”

The two Rangers from Fort Severn, who rested in Peawanuck, were to escort Mr. Kakekaspan back to Fort Severn. One of them, Ranger Childforever, is one of many foster children who have stayed with Mr. Kakekaspan and his wife Thelma over the years.

OPP Sergeant Stirling said the incident shows the important of being prepared for life threatening emergencies in the North. “No matter where we are, but especially up in Northern Ontario where distance is not in our favour, we should be more prepared than ever. The preparation may be a satellite phone and a survival pack to be prepared to stay on the land overnight. The safety plan should be a prepared plan.”