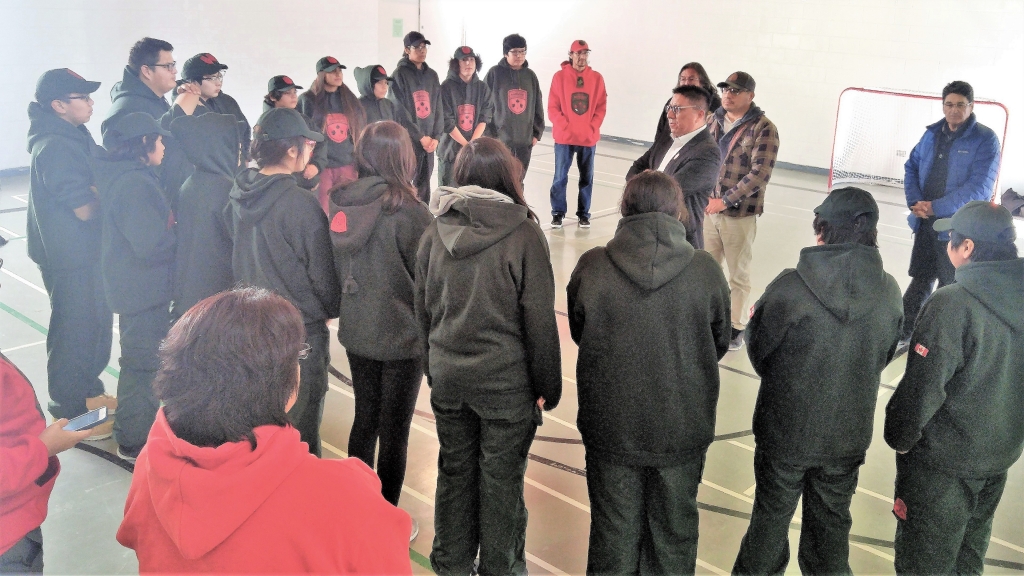 Members of the local Canadian Ranger and Junior Canadian Ranger patrols played a lead role at a funeral Monday in Bearskin Lake First Nation at the funeral for a 13-year-old Junior Ranger who committed suicide.

Citizens of the small Oji-Cree community, which has a population of 500 and is located 625 kilometers north of Thunder Bay, were shocked when they learned Karlena Kamenawatamin died by her own hand last Wednesday.

They expressed their grief while making it standing room only in the small Full Gospel Church for both the visitation and the funeral service. Junior Rangers acted as pall bearers and presented a Junior Ranger flag to Karlena’s parents at the conclusion of the service. They also flanked Karlena’s casket in the back of a pick-up truck when it was driven from the airport to the church after an autopsy in Thunder Bay.

The Junior Rangers are a culturally sensitive Canadian Army program for boys and girls aged 12 to 18 in remote and isolated communities across the Canadian North.

“There’s a lot of sadness in the community,” said Warrant Officer Kevin Meikle, an army instructor, who helped organize the funeral. “It’s a very small community so any loss is felt by all and certainly all the Junior Rangers knew Karlena well. They are sad but they are coping.”

He said grief counselors who flew into the community were helping the Rangers and Junior Rangers and other community citizens by conducting sharing circles with them.

“We were shocked when we learned of her death,” said Captain John Mc Neil, the army officer who commands the 1,000 Junior Rangers in 24 First Nations across the Far North of Ontario.

In July, Karlena was awarded the Order of St. George Medal, a prestigious national honour, for her outstanding leadership at Camp Loon, an annual advanced leadership training camp for Junior Rangers in Northern Ontario.

Karlena’s mother said her daughter enjoyed being a Junior Ranger. “She told me Karlena was very excited about going back to Camp Loon next year,” Warrant Officer Meikle said.

Grand Chief Alvin Fiddler of Nishnawbe Aski Nation met with the Junior Rangers and told them Karlena’s death had brought attention to the difficult living conditions in most of the North’s First Nations. Karlena lived in a run down house without electricity.

Sol Mamakwa, the NDP MPP for Kiiwetinoong riding, was also in Bearskin Lake for the funeral. He shocked the Ontario Legislature last Thursday when he stood to announce Karlena’s suicide and told them that three years ago a 10-year-old girl committed suicide in the community.

“Two years ago, the suicide rate for children under the age of 15 in First Nations I represent was 50 times more than the national average,” he said. “But what has changed since these children took their own lives? ”

He called on the Ontario government to do more to stop the “pandemic” of Indigenous youth suicides in the Far North.