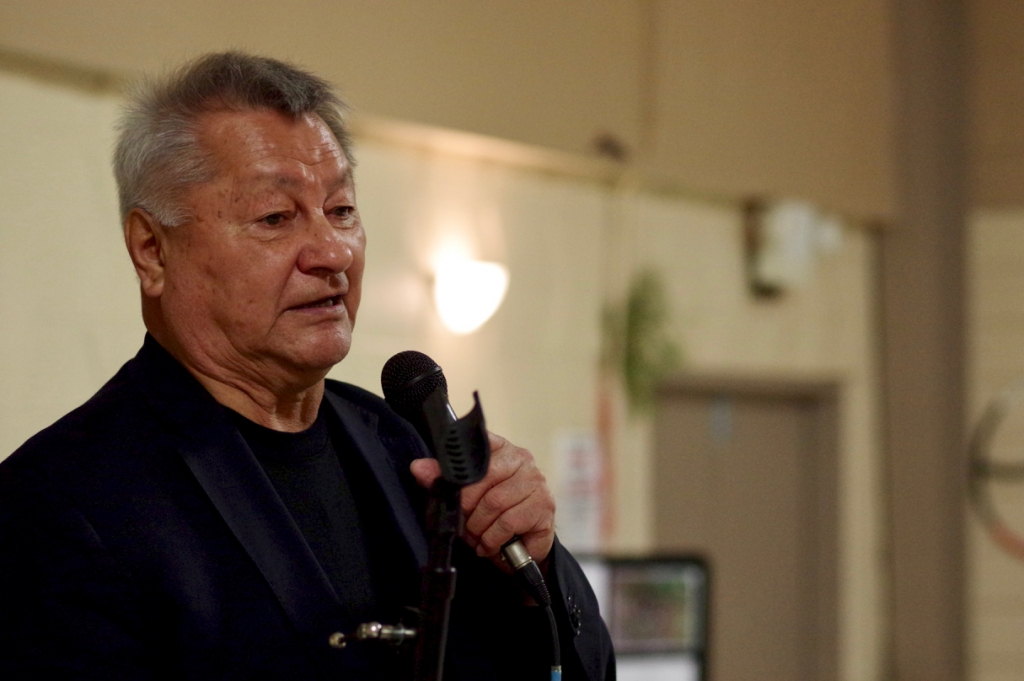 Attawapiskat Chief Ignace Gull says his band has confiscated about $100,000 worth of illicit drugs at the northern street value since implementing a drug search policy to combat illegal drugs in the community. (Photo by Rick Garrick)

Attawapiskat Chief Ignace Gull wants to share the steps his community followed to implement a drug search policy in the community to combat illegal drugs.

“What we’re doing is we’re saving lives,” Gull says. “We’re trying to save young children and the unborn. That is why we are doing it. It is very important to share the steps that we took in order to be able to do it the way we did it.”

Gull says a petition was signed by 418 people in 2015 to mandate the chief and council to do something about the illegal drugs that were being brought into the community.

“We lost two young people from the same family, a young woman and a young man,” Gull says. “They died through overdose from speed.”

Gull says the mother asked the chief and council to do something about the illegal drug situation in Attawapiskat.

“It took a few years to get started,” Gull says. “We had to figure out how to do it, and we went through struggles just to do what we are doing because we didn’t have the resources to do it. We had to bring in the resources from the outside.”

Gull says there has been a “very good” response from the community to the drug search policy.

“There has been a lot of positive change,” Gull says. “It is a positive step and it is making a big change in the community.”

“But they can charge a person once we confiscate the drugs from the individual,” Gull says.

NAPS charged a 54-year-old female with two counts of Possession for the Purpose of Trafficking under the Controlled Drugs and Substances Act after a drug seizure was made by Attawapiskat’s civilian volunteers on Sept. 13 during a drug search at the Attawapiskat Airport. The volunteers located Methamphetamine and Marihuana worth about $23,000 in northern street value during the search. The drugs were handed over to the Attawapiskat NAPS detachment, who were then assisted by the NAPS Drug Enforcement Unit.

“Since we started, we’ve confiscated about $100,000 worth of illicit drugs, the street value,” Gull says. “(And yesterday), the RCMP charged three people in Kingston. These people were supplying the drugs to the communities along the James Bay coast.”

Gull says there has been a good response on social media about the drug search policy.

“Each community should do something like this,” Gull says. “All you have to do is take that initiative and get the support from your people to do it, and just do it.”

Gull says the band is also trying to help the community citizens that have been charged with drug offences.

“We’re all in it together,” Gull says. “It’s a small community, and we are also trying to find a way to help the people that have the addiction. That is the step I am taking right now — how can I get the resources to help the people to have a recovery and get back within their family and get back to a good life. That is the other thing that is important to understand — everybody needs help in order to recover.”

Grand Chief Alvin Fiddler says he commends the leadership in Attawapiskat for taking the “extraordinary measures” to ensure the safety and wellbeing of all their citizens.

“I was there in July to go and meet with the leadership and the volunteers to see firsthand the good work they are doing, but also to hear from them about the ongoing supports they will need in order for that work to continue,” Fiddler says.