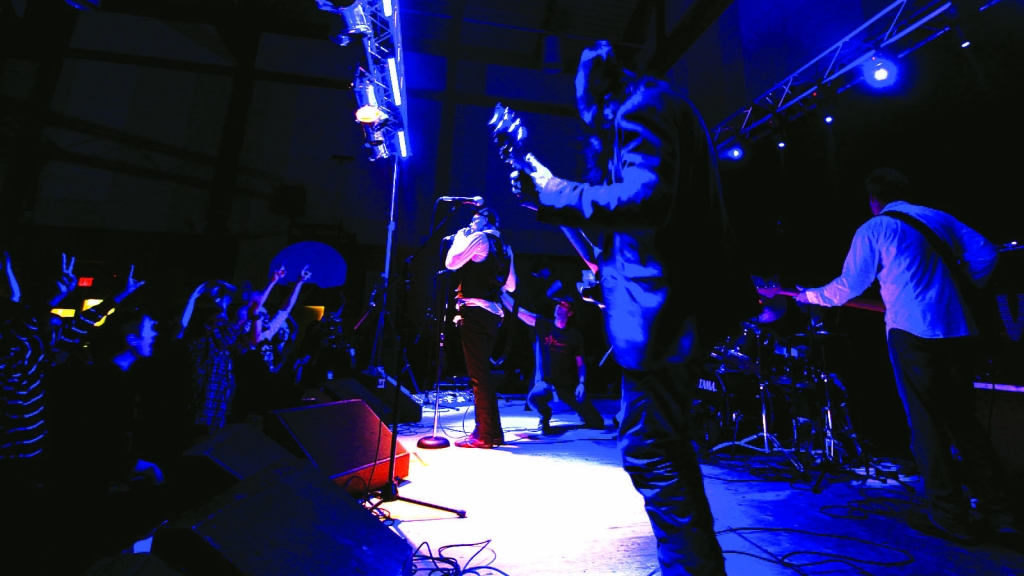 Over 500 people from the James Bay coast turned up to see the Tragically Hip perform in Fort Albany First Nation on Feb. 16.
The Canadian rock band and award-winning author Joseph Boyden were in Fort Albany First Nation to take part in the Great Moon Gathering that focuses on both traditional and contemporary Aboriginal education.
Like most northern communities, teachers who are contracted to teach in the Mushkegowuk communities are often non-Aboriginal, straight from university or college, with little knowledge of the local traditions and culture.
Through its workshops and discussions, organizer Edwund Metatwabin said the Great Moon Gathering is way for the community to share its traditional knowledge and culture with the educators.
“If we can give them the tools, if we can be kind to our teachers, and care for them and watch for them, they in turn can pass on these things to our children,” Metatawabin said.
Boyden was a teacher in the James Bay area, as he taught at the Northern College satellite campus in Moosonee. His two acclaimed novels, Three Day Road and Through Black Spruce, feature Cree people as the main characters and take place in the region.
Metatawabin contacted Boyden and asked if he could be a keynote speaker in the conference. He also asked him if he could get in touch with Gord Downie, lead singer of the Tragically Hip.
Downie had already been up to the James Bay area with Boyden a few times.
“I had a wonderful time,” he said of his earlier trips. “I brought my son with me and I think he enjoyed the bush.”
In visiting Fort Albany at the time, Downie knew the Tragically Hip should visit. Then about three months ago, he was asked if he wanted to go back by Boyden.
“So I said write the boys (the band) a letter and he did, and within an hour the guys said, ‘Let’s do it,’ and here we are,” Downie said. “I had been talking to the boys about (the James Bay area), so they kind of jumped at it.”
The Tragically Hip performed in the Peetabeck Academy gymnasium to a standing room only crowd.
Local acts opened the show, including a high school band performing Knocking on Heaven’s Door with Downie as guest vocalist.
“The kids really liked that,” Metatawabin said. “They were really flying and their spirits were really high.”
John Kataquapit performed two Cree songs followed by Jon Kapashesit of Moose Cree First Nation and a duet of Shannon Moon and Sheila Gruner, who are both from Algoma University and involved in the community’s Paquataskamik Project.
Then the Hip took the stage.
“The concert was awesome,” Metatawabin said. “Everyone was jumping up and down and screaming.”
“It was very emotional and real,” Downie said. He recalled hearing many goose calls from the audience over the course of their set. “I found it very comforting.”
Prior to the concert, Downie and the band walked out into James Bay to go ice fishing with some local residents.
“I was thinking, maybe I’m the first of my ancestors to stand in that spot, which I sort of declared, which I never really done – but that doesn’t make me a heck of guy,” Downie said. “Anyway, it was a really beautiful experience, which is what we needed to do: to just be outside because we were always rehearsing so it felt really good.”
The band was well received by the community.
“We’ve been treated like royalty,” Downie said, adding that locals prepared moose stew as a pre-show meal. “It was very hearty and good.”
Metatawabin called the Great Moon Gathering a success.
“Everything went well and everyone had a great time,” he said.
Boyden said he and the band had a great time up in Fort Albany.
“The event was magical,” he said. “The people were so warm and receptive. The band absolutely loved it. And Karen Metatawabin made them all moosehide hats and beaver hats as gifts, so they just absolutely loved it.”
Boyden said he was glad to have the opportunity to go up to the community to dispel the negative press the region receive.
“I’m a fighter for the people, and I’ll always do that,” he said. “I’ll try to correct the misunderstandings that many people have, and always show the beauty of the people as well.”