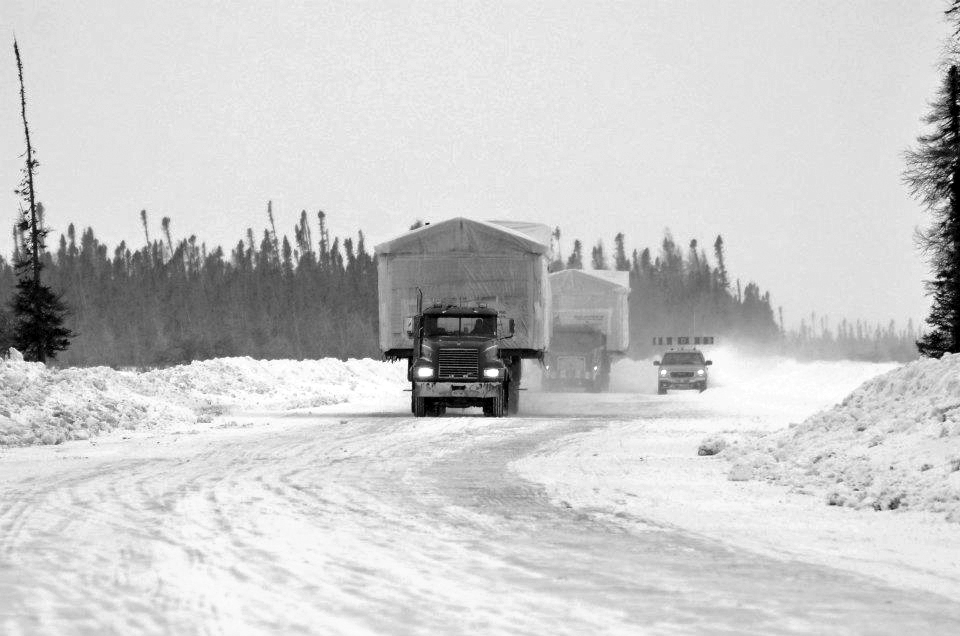 Even though the James Bay winter road opened for heavy traffic on Feb. 5, only two of the 22 modular homes purchased for Attawapiskat families arrived in the community by Feb. 12 as the rest continued to sit in a Moosonee lot.
The First Nation said the reason for the delay was because the lots assigned for the trailer homes had yet to be prepared due to winter building conditions.
“There are a lot of variables,” Wayne Turner, executive director for the First Nation, said. “In addition we had to wait for the opening our gravel supplies, and hopefully that contractor will be hauling the gravel next week.”
Mike Gull, who is charged with preparing the lots, said that the sites have to be excavated of earth and vegetation so that gravel could be put in place to support the trailers. This process takes 2-3 days per lot. He didn’t get word to begin the lot preparations until Feb. 7.
Despite the delay, Turner said the community expects to have all 22 trailers within the community by the time the winter road closes, which historically has been mid-March.
Once a trailer arrives, it could take up to four weeks for a family to move in due to the time needed for hydro, water and sewage hookups along with inspections.
But while Turner said the winter conditions are the main reason for the delay, MP Charlie Angus (NDP – Timmins-James Bay) believes the third party manager and the federal government is the cause due to funding.
In the House of Commons on Feb. 7, Angus and Aboriginal Affairs and Northern Development (AANDC) Minister John Duncan jousted over who was accountable for the delay.
Angus said that the third party manager “screwed up.”
“He has been withholding the funds needed by the De Beers technical team to get the site work done in Attawapiskat,” he said.
Duncan countered that the third party manager is standing by to pay once the band council submits the invoices.
“We strongly encourage the chief and council to act, which will ensure speedy delivery of the homes,” he said.
Word of the delay came just days after a court denied Attawapiskat’s application to remove the third party manager. The community filed a court injunction in December, challenging Duncan’s decision to appoint the manager.
On Feb. 3, Judge Michael Phelan ruled that Attawapiskat’s request did not meet the legal test for an injunction without a full hearing and that the separate judicial review application to quash the appointment will still be heard on Apr. 24.
In the meantime, Phelan said that Attawapiskat “shall not be required to accept, acquiesce or acknowledge the legality of the appointment of the [third-party manager] in order to secure payment of the invoices.”
He said the dismissal of the injunction request is conditional upon the government’s compliance with the order for it to pay for the homes.
In a written statement issued following the ruling, the Attawapiskat chief and council said that the decision “does not affect the First Nation’s overall legal challenge of third party management,” and that at the Apr. 24 hearing, the federal court “will fully consider the lawfulness of the (Duncan)’s appointment of the third party manager.”
“The court rejected Canada’s arguments that there was no serious legal issue raised by the First Nation’s complaints,” the statement continued, “and also rejected Canada’s argument that the court had no jurisdiction to grant an injunction.”