Leading the life she wants 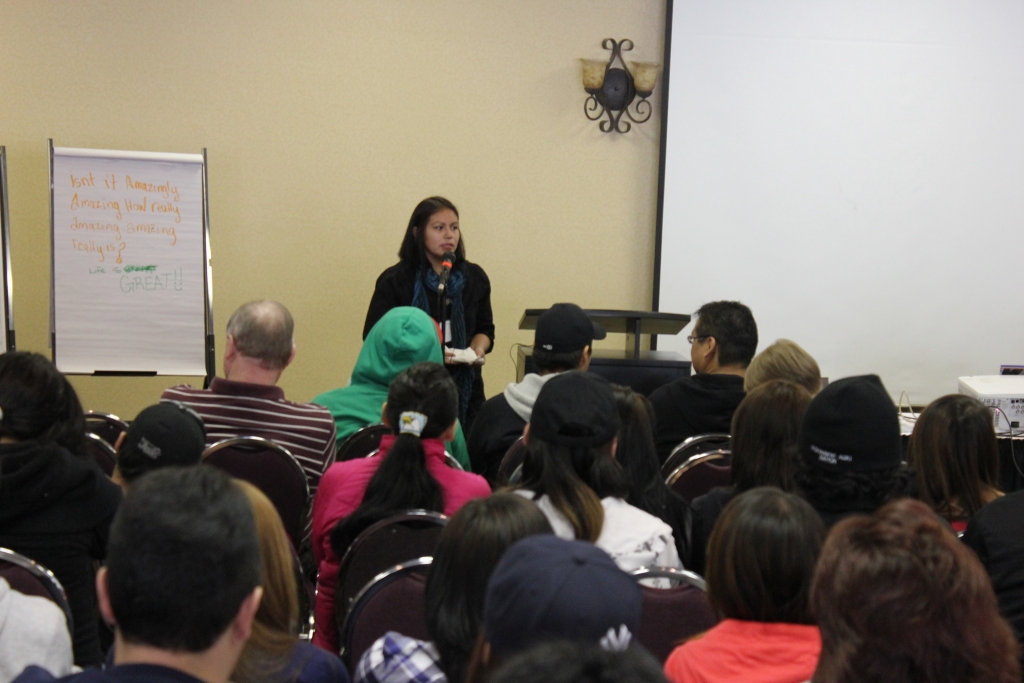 After the film credits ran and the lights came on, Doris Slipperjack stepped to the podium and spoke before a group of youth gathered from across northern Ontario.
“That’s the first time I’ve ever been honest and truthful, and I never thought I could do anything like that,” the 23-year-old said about the film. “I used to be shy, and I shut myself out from the world.”
She pauses then continues, her voice starting to quiver.
“I’m surprised something like this can happen to me, especially with all the hardships that I’ve been through. I never thought good things can happen to me.”
The Life You Want: A Young Woman’s Struggle Through Addiction was screened at the Oshkaatisak Niigaan Oji Gathering on Feb. 9 in Thunder Bay. The 34-minute documentary, produced by the Sioux Lookout First Nations Health Authority (SLFNHA) and filmed by Thunderstone Pictures, chronicles Doris’ struggle with prescription drug addiction and her attempt to seek treatment.
In a series of interviews and candid moments, Doris is unflinchingly honest in talking about her addiction and how it affects her, her three children, and how widespread the drug addiction problem is in her community of Eabametoong First Nation.
Doris still remembers watching the documentary for the first time.
“I cried,” she told Wawatay News. “Hard to believe that was me.”
Watching it brought home the reality of her life and struggle with addiction.
“I planned to have to good life and I can’t believe that’s what happened to me,” she said.
Doris’ involvement with the project almost never came to be. When SLFNHA representatives came into the community in late-2010 and interviewed Doris on camera about drug addiction, she denied it.
“I just started feeding them B.S.,” she said. “Then I thought, why do I have to lie? So I called them back and said, Yeah, I do drugs, and we did the interview again.”
Then in early 2011, she was contacted about the documentary, and she agreed to do it.
“I jumped at it, because it’s secretly what I wanted to do – to help people,” she said.
The documentary was filmed over several months, as the film crew visited the community and captured Doris in her home, and then followed her as she went to detox in Dryden before attending a treatment centre in Thunder Bay in the spring.
The release of The Life You Want has given Doris a lot of attention from both media and the general public.
In January, she was interviewed on CBC’s national radio program The Current in a segment that lasted 30 minutes. Then she was contacted by the British Broadcasting Corporation to do another video production. A BBC film crew recently followed Doris as she traveled back to her community on Feb. 10.
Members of the public also contacted Doris.
“A lot of people are coming up to me or sending me messages on Facebook,” she said. “Especially young mothers. They say how much I’ve inspired them and that it feels good to know that they’re not alone.”
She gets recognized in public. While waiting for a flight to Sachigo Lake at the Sioux Lookout airport, Doris had the feeling that people nearby were watching her.
“Then an old man came up to me, staring at me, and said ‘Doris? Oh, it is you!” she recalled. “He said he saw the film and gave me a hug.”
In January, Doris was surprised to receive a letter from an elderly man in Victoria, B.C.. The writer said he heard Doris on The Current and was so “struck by the honesty, courage, and intelligence” she conveyed that he was moved to tears.
He wrote that the term ‘hero’ is often wrongly applied, but felt Doris was a ‘true hero.’
“Your determination to overcome your addiction and to be a shining light in your community are indeed heroic in my opinion,” he wrote.
When Doris was asked if she felt like she was hero, she immediately replied no.
Then she paused to think.
“I don’t know, kind of,” she said. “I’m just trying to help people save themselves.”
The documentary sparked something in Doris, as she’s now working harder than ever to help others.
She has been pushing her community to start a youth council, and recently became a member of the Oshkaatisak Council, the youth council for NAN.
And she’s accepted many invitations to speak at conferences and gatherings across the region to share her story with others.
“This film helped me to open up, to be honest,” Doris told the youth at the Oshkaatisak Niigaan Oji Gathering. “It actually helped change me. It helped change the way I see life. It helped change the way I do things. I kind of feel like I’ve been set free.”
The end of The Life You Want indicated that Doris relapsed three days after returning home from treatment. Doris told Wawatay the last time she abused drugs was in early December. The documentary highlighted that there is no after care program in the community, and Doris had indicated the dangers of returning home where drug addiction has overtaken over 80 per cent of the community.
But Doris told the youth she recently went on a Suboxone program, a drug that replaces the physical effects of narcotics such as oxycodone, and that this is the longest time she’s been off using prescription drugs since she first tried to quit.
“I’m still working on it,” she said to the youth. “Like I said (in the film), it’s a never ending battle, and I’m willing to fight this battle until my time is up.”