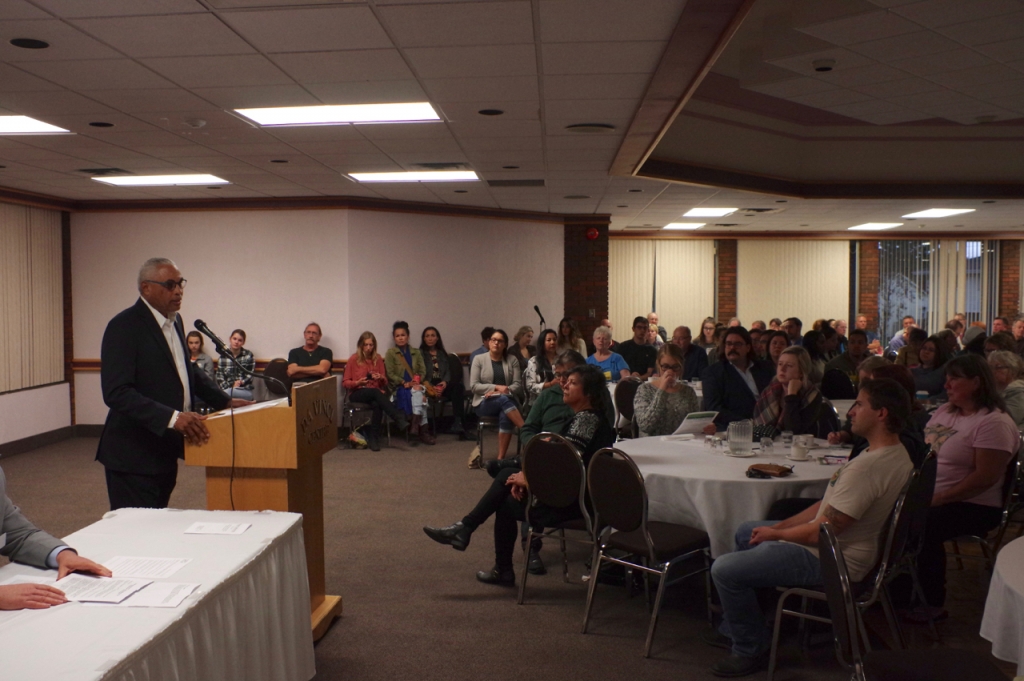 The grandfather of Josiah Begg, one of two First Nations youth found in the Neebing-McIntyre Floodway this past May, wants to see results from the Office of the Independent Police Review Director’s review of the Thunder Bay Police Service.

“I hope it gets somewhere, and that the message is out there that there is a problem here,” says Kitchenuhmaykoosib Inninuwug’s Mike McKay, one of hundreds of people who attended the OIPRD public meeting on Sept. 25 at the Da Vinci Centre in Thunder Bay. “Hopefully we create a dialogue.”

The OIPRD held the meeting to hear feedback and recommendations from the public to better understand community relations and policing in Thunder Bay. The OIPRD is conducting a systemic review of the policies, practices and attitudes of the Thunder Bay Police Service (TBPS) related to Indigenous death and missing person investigations. “I’m hoping that the (Thunder Bay) Police Service is more receptive, more understanding, to First Nations,” McKay says. “I felt when I was here (during the search for his grandson in May) is like it didn’t matter. It was like they weren’t listening to us, but I understand because like I said I was a police officer for six years and I know the stresses they go through. But that does not stop you from trying to help people. Each individual should be treated with respect.” Wunnumin Lake’s Dean Cromarty says the public meeting was “kind of cramped” and too short. “Even in the small roundtables, we didn’t have time to really know each other and talk to each other,” Cromarty says. “But I still think it was an opportunity for people to provide their opinion to the (OIPRD).”

Independent Police Review Director Gerry McNeilly was pleased with how the roundtable participants discussed the issues and recommendations even though they did not know each other. “It just moved me because that was a big part of something that I am trying to do with this systemic review, to bring the community together so there can be some open discussions about really pertinent issues,” McNeilly says. “What we heard tonight was a lot of people expressing some particular issues but also talking in general ways about better communication, about respect, about acknowledging each other, that we are all the same.”

McNeilly plans to hold another meeting in Thunder Bay to hear from people at a shelter. “I think it is important to hear those voices,” McNeilly says. “Hopefully I can get to a shelter and we can have some discussions with the people in the shelter.” McNeilly also plans to hold another public meeting to hear more from the community. He and the OIPRD team previously met with more than 100 individuals, First Nations leaders and communities, Indigenous organizations, community and service organizations and members of the TBPS and the Thunder Bay Police Services Board during about 24 visits to Thunder Bay.

People from different walks of life and different cultures were saying there is racism and we’ve got to do something about it.” McNeilly plans to complete the review of the TBPS by the end of this upcoming winter. The review was launched in November 2016 after Rainy River First Nations Chief Jim Leonard and Brad DeBungee filed a complaint related to the TBPS’s investigation into Stacy DeBungee’s death in the McIntyre River in 2015.

NHL RADIO CONTEST: Follow the link to get closer to the word of the week! http://www.wawataynews.ca/feature-stories/national-gathering-elders-2017