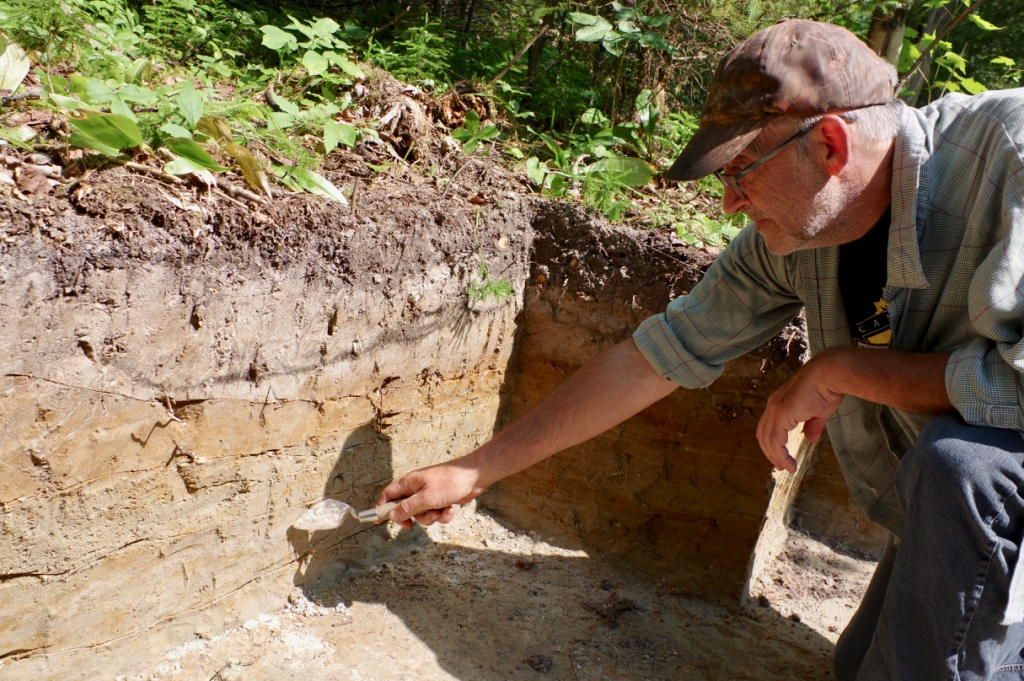 Local archeologist Jeff Bursey points out some of the different soil layers at his archeological dig site on the south side of a creek in the Sioux Lookout area. (Photo by Rick Garrick)

Local archeologist Jeff Bursey has expanded the area of his archeological dig on the south shore of a creek in the Sioux Lookout area after finding more artifacts.

“The site has gotten a lot bigger — it is now at least a quarter of a hectare in size,” says Bursey, who has a PhD in Archeology, previously worked as an archeologist with the Ministry of Transportation and University of Toronto and has published about 30-40 articles. “I’ve been doing a lot of testing through the bush, what we call test pits. That is literally digging, in this case, every two or three metres. I’ll dig a small shovel-sized test pit to see what artifacts might be buried there. I’ve discovered I’ve got to go down at least 70 centimetres now to be sure I got everything.”

Bursey says he has documented that there was a lot of erosion that went on at the site.

“A lot of sand was getting washed from higher up the hills and that is what buried the site,” Bursey says. “The ground cover would have been pretty unstable. If you think of all the sediment that would have been deposited at the bottom of glacial Lake Agassi (which once covered most of Manitoba and northwestern Ontario), a lot of sand and silt, and when it was exposed before plants had an opportunity to become fully established and put in thick root
systems, it would have been subject to a lot of erosion from even just normal rain.”

Bursey says he has found some environmental data, which is basically carbon-rich soil that was buried deep in the soil, at the site.

“From that I can get, hopefully once I can afford it, a date,” Bursey says. “But also it can be looked at and plant remains identified, so you can tell what the environment looked like. I expect it’s going to be like an arctic environment.”
Bursey adds that he and Brad Hyslop, who received the 2018 Margaret and James F. Pendergast Award from the Canadian Archaeological Association for his work in the Lac Seul area, also found outcrops of the distinctive green cherty rhyolite material that the artifacts were likely made from across the creek from the site.

“It appears that is where they were quarrying to get the stuff they were using on the site,” Bursey says. “They were breaking off large pieces and then it appears probably going across what is now the creek but what was then probably a little bay with the water levels high. So they would just be canoeing across, pulling up on the beach where I am digging and then taking those large blocks of flint-chert and flaking that into tools that they could then take with them when they crossed the landscape hunting or doing whatever.”

Bursey says the quarry site indicates that the people back then were making “heavy use” of the area, noting that the whole north side of the creek will probably be looked at for many years into the future.

“Honestly, I can’t anticipate myself being able to finish that area in my lifetime,” Bursey says. “It’s such a big, rich area for those first people. It would literally take me 20-25 years.”

Bursey says he is planning to sign an agreement with Lac Seul to eventually turn over everything he finds to the band.

“I think it needs to stay here in the community,” Bursey says.

Bursey adds that Hyslop has found artifacts from across the Lac Seul area that match up with the green cherty rhyolite material they found at the quarry site.